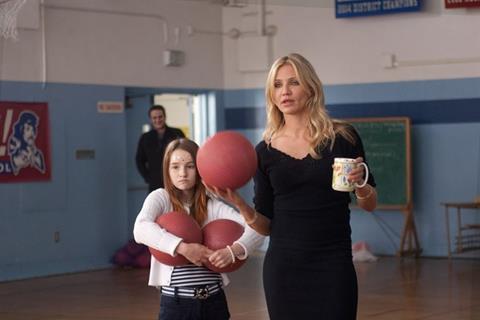 Cameron Diaz gets to play things crude, rude and nicely raunchy in Sony’s unrepentantly foul-mouthed and at times extremely funny comedy Bad Teacher. In the end it never quite has the conviction to go the whole down-and-dirty distance (a la The Hangover and Bridesmaids), but it is a terrific film for Diaz’s earthy charm and easy charisma.

Bad Teacher is the perfect vehicle for Cameron Diaz.

Opening on June 17 in the UK – a week before its US outing – Bad Teacher will be out to re-educate humour-hungry audiences looking for a contrast to the likes of Green Lantern and Transformers: Dark Of The Moon, with Sony keen to push the red-band raunchiness of the film and harness the sex appeal - and mainstream media interest in - of Diaz and Justin Timberlake.

The film has a good chance of opening strongly, though whether it will have the legs to exist too long up against the big summer tentpole films waiting in the wings remains to be seen, but it is also likely to perform strongly internationally prior to a healthy home entertainment life.

Cameron Diaz has always been a strong comedy performer, but in recent years hasn’t had the right movies to take advantage of her lazy sexuality and raunchiness. Her Bad Teacher character puts that right – middle school teacher Elizabeth Halsey is foul-mouthed, inconsiderate, selfish and hilariously inappropriate, and as the film opens is simply there sleeping though her lessons as she finalises plans to marry her meal-ticket wealthy man.

But dumped by her fiancé she finds herself back at school – the last place she wants to be – and desperate to find a way out. She quickly spies a quick-fix in the form of the school’s new rich and handsome substitute teacher Scott Delacorte (Justin Timberlake), but finds herself competing for his affections with her peppy and super-keen colleague Amy Squirrel (Lucy Punch).

After failing to impress him with her sheer force of personality, Elizabeth’s answer to the situation is simple – she needs new breasts. Cue plenty of attempts by her to raise money (including a clichéd, but pretty amusing, scene of her taking over the school charity car wash event and slithering and sliding sexually in the foam and water to the enthusiasm of all the male on-lookers) for her breast-enhancement operation.

When she realises there is money to be made in the school award for best teacher she starts to take things moderately seriously – which involves shouting at her students a lot – and also takes advantage of a school trip to lure Scott to her bedroom…which involves a bizarre scene of dry-humping that feels like it has been leveraged in to up the crude-quota.

Jason Segel is on-hand to pop up intermittently as the school’s happy-go-lucky gym teacher Russell Gettis. He is keen on Elizabeth, but as he has no money he is barely on her radar – but he isn’t fazed by her rejection, keeps on coming back for more, and Segel’s genial personality is a nice fit alongside the manic behavior of Diaz.

There is a niggling suspicion that Bad Teacher is trying just too hard to replicate the crude’n’rude humour of the likes of Superbad and Knocked Up, but it is also the perfect vehicle for Cameron Diaz. Her sinuous sexuality and raucous sense of humour are nicely channeled into the engagingly outlandish behavior of Elizabeth Halsey, and she drives the film with a real energy and passion.

The supporting cast are also spot-on. Timberlake does a great job in puncturing his public profile with this performance as an earnestly bland teacher, while Brit Lucy Punch is excellent as Diaz’s school sparring partner. It is a role she has played before, but she is a natural comedienne and at ease here. Perhaps best of all, though, is Phyllis Smith (who features in the US version of The Office) as Elizabeth’s mild-mannered teacher friend who nervously delivers many of the film’s killer lines.