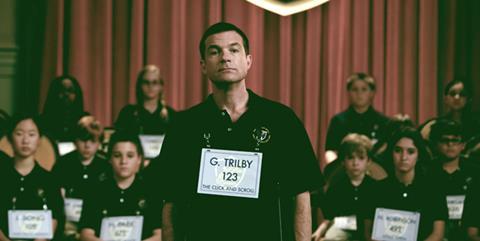 Actor Jason Bateman makes a smoothly successful transition to the director’s chair with Bad Words, a tart, likable comedy that must have been pitched as ” Spellbound meets Bad Santa”. Bateman’s dry central performance and breezy handling of Andrew Dodge’s Black List script generate enough gleeful mischief and heartwarming charm to promise a profitable theatrical release domestically although it might have to fight a little harder to make an impression on global audiences. Focus Features secured rights to the title following its Toronto world premiere.

There are echoes of Christopher Guest’s ensemble comedies in the way Bateman confidently immerses us in the world of the televised Spelling Bee championships.

He may not be willing to share them for a good part of the film but grumpy, misanthropic, fortysomething Guy Trilby (Bateman) has good reasons for wanting to inveigle his way into the contenders at a national Golden Quills Spelling Bee. A loophole in the rules leaves him enough space to join a contest traditionally intended for children.

He is as welcome as the proverbial fart in a spacesuit and his mere presence is an irritant to horrified parents and stuffy tournament organisers, including Professor William Bowman (Philip Baker Hall). Guy is sponsored by online journalist Jenny (Kathryn Hahn). who senses a big story if only she can crack the sarcastic, foul-mouthed, implacable personality Guy uses to keep the world at arm’s length.

Guy’s twisted mind games and dirty tricks create some amusing moments and Bateman seems to relish the chance to play against his screen image as a reasonable, mild-mannered good guy. His speech is peppered with profanity and one-liners intended to hurt and humiliate the unwary.

The one person who finds him irresistible is Chaitanya (Rohan Chand), a wide-eyed, 10 year-old competitor desperately seeking a friend and a father figure.The strongest appeal of the film lies in the unlikely friendship that develops between Guy and Chaitanya especially when the middle-aged man provides the boy with an unforgettable night on the town.

Rohan Chand is an utter delight as the guileless, irrepressible Chaitanya and a mark of Bateman’s directorial style is his ease with the performances. Everyone is given a generous chance to shine, including Allison Janney as embittered Golden Quills director Bernice and Rachael Harris as a parent incensed by Guy’s intrusion into her world and the horrible things he says about her private parts.

There are echoes of Christopher Guest’s ensemble comedies in the way Bateman confidently immerses us in the world of the televised Spelling Bee championships from the ringside commentators to the strict enunciation of words designed to challenge even the pluckiest contenders.

Snappy editing from Tatiana Riegel ensures a compact running time and a film that never overstays its welcome. The sharp, vinegary wit of Dodge’s screenplay may eventually make way for a more sentimental mood but Guy remains true to his mean-spirited instincts for the best part of the story and any sense of redemption is won honestly and fairly.