Ballad Of The Weeping Spring 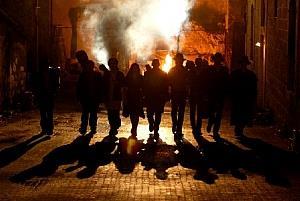 The Magnificent Seven, or at least their doubles, turn east, take off their guns, pick up exotic instruments and start playing and singing for Benny Toraty’s second feature film, a pleasantly entertaining melodramatic fairytale, targeting fans of Oriental music wherever they are.  Though probably too unsophisticated to draw the attention of leading festival programmers, this could easily turn out to be a crowd pleaser all over the Middle East, or at least the territories accessible to Israeli films.

The acting, just like the camera, seems to be inspired by Western traditions, ranging from effectively minimalist to purely farcical.

Using the narrative formula of the John Sturges western (borrowed from Kurosawa’s classic The Seven Samurai), this road movie, clearly indebted visually to the American western and its spaghetti cousins, journeys from one fictitiously named location to another, carefully avoiding to pinpoint either the time or the spot in which it is taking place.

Shot entirely in Israel, in carefully selected spots all over the country, Ballad Of The Weeping Spring (Balada La’Aviv Haboche) manages however to assemble together disparate sites and places, creating a surprisingly homogenous world existing in a time and space of its own, refraining at the same time from any precise references to the ethnic, nationalistic, religious or political conflicts that have been tearing this area apart for ages.

Josef Tawila (Uri Gavriel), once the leader of a legendary band “Turquoise”, has been living for the last 20 years the life of a hermit in a remote mountain village, when he is visited by a young man, Amram (David Tassa) who turns to be the son of his best friend, Avraham Mufradi (Arnon Tzadok).

Tawila and Mufradi were the heart and soul of “Turquoise”, and together they wrote all its hits and now with Mufradi on his deathbed he has dispatched his son to remind Tawila of his pledge – to perform the last song they wrote, Ballad Of The Weeping Spring in the cave which had become a kind of shrine to them all.

This is the kind of request Tawila can’t turn down and with Amram accompanying him, he goes out on the road to find the musicians that could qualify for such an eventful concert. In the process he also unveils the reason for his early withdrawal from the world.

Each musician they pick offers the script another excuse for a mini-adventure, before he joins the team. The first is Tamara (Adi Gold) the daughter of their former soloist, who is now in a wheelchair. Next, there are the reticent David Farid (Nir Levy), whose wife is worried that once back on the road he’ll start drinking again and Bad Luck Shimon (Uri Klausner) has just locked himself in his home, for fear of his bride-to-be and her two mountainous brothers.

A blind flutist has to be released from the grasp of his crooked agent, a drinking competition has to be won before a gifted violinist (Mark Eliahu, the composer of the film’s soundtrack) is allowed to join them, and so on. Ultimately, however, whatever the obstacles, all these escapades have happy endings, for no musician in his right mind would resist such a tempting offer. It would almost be like refusing to participate at a Beatles reunion.

A period piece in every sense, though the period itself is not quite clear, Toraty’s film has to be commended not only for the remarkable use of its sets, locations and costumes and for the soundtrack which serves as the picture’s backbone, but also for the evident sympathy it displays towards all its characters, even those with a distinct villainous inclination.

The acting, just like the camera, seems to be inspired by Western traditions, ranging from effectively minimalist to purely farcical. If Uri Gavriel plays the lead in the spirit of the seasoned hero of the prairies who always knows the right answer and takes the right decision, Uri Klausner, as the fearful bridegroom, is evidently trying to emulate Eli Wallach in Sergio Leone’s films. It is true that every once in a while, they may be all engulfed in a wave of gushing emotions but it is all in good spirit and those who can appreciate the kind of music provided by Mark Eliahu, will find it the story perfectly adequate in the circumstances.