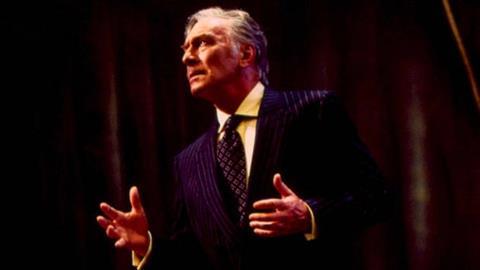 John Barrymore, dubbed the Great Profile, was theatre’s bad boy in the early years of the 20th Century. A star performer in his twenties, he solidified his standing in the 1920s mixing popular plays with classics such as Richard III and Hamlet and also found success in silent movies, but by the time sound arrived the toll of years of alcohol and carousing found him often cast in roles parodying his off screen persona.

Plummer has obvious respect and affection that keeps the character real and poignant.

Christopher Plummer, who can claim a not too shabby profile, originated the role of Barrymore in William Luce’s play back in 1996 and received a Tony for that performance a year later. He returned to that role several years ago and the revival’s producer, Garth Drabinsky, decided to adapt the show for cinema.

As such, Barrymore, the film, is in the tradition of The American Film Theater presentations of the 1970s that included the likes of The Iceman Cometh and Luther.It remains faithful to the text and setting but employs cinematic devices to intensify rather than open up the material.

The conceit of the play, set in 1942 just prior to the actor’s death, is that the actor is preparing to present a new Richard III for potential backers. It’s his last gasp for a comeback. And in the hours leading up to his pitch, he runs lines with a prompter _ the only other character in the piece.

The device was ideally served on the boards and works effectively on screen. The run through is largely an excuse to allow Barrymore to reflect and ruminate on work, life and career between Shakespearian passages remembered as well as those that require off-stage coaxing. Obviously his memories and musings provide the dramatic juice.

Plummer weaves through all the character’s shadings. His pridefulness, self-deprecating humor, incisive flashes, destructive streak as well as the physical failings he developed as he flaunted rules and let discipline run amok. It’s appropriately a full-blooded portrait, balanced between life and death and rife with pathos. It’s easy to see how Barrymore might emerge as buffoon and a tragic eminence but Plummer has obvious respect and affection that keeps the character real and poignant, even for those with scant knowledge of his legend or infamy.

Director Erik Canuel (also credited with the screen adaptation) largely refrains from cinematic flourishes in this transfer. In fact he opens the film with shots of an audience and applause and only notes their presence again in the closing credits with a curtain call. His additions of Barrymore as himself and others cross-cut and a brief respite from the stage to a dressing room are appropriate filigree. Overall it’s an adroit, fluid adaptation anchored by a riveting performance.

Commercial prospects are limited and it’s impossible to imagine the film working for other than the cognoscenti in a theatrical context. Barrymore is best served as arts programming for specialised cable and satellite outlets with a small revenue boast on DVD from film history fanatics.