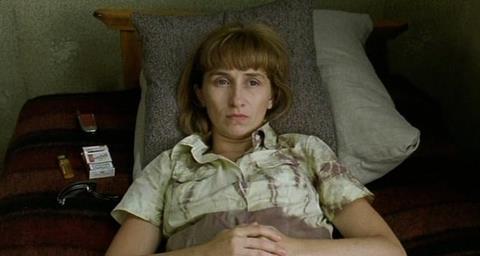 Bedouin starts as a stark melodrama about a woman willing to do anything to save the life of her daughter diagnosed with leukemia and it ends as a desert mirage message proposing to look at this absurd world upside down. The film screened in competition at the Karlovy Vary Film Festival.

At first Igor Voloshin’s film seems to be a grim portrait of Russia today, but it loses its grip on reality and on its audience the more it proceeds towards its fancy ending. Impressively shot by one of Russia’s greatest cinematographers, Alexey Rodionov (Come And See, Orlando) and with a dedicated performance by Olga Simonova in the lead, it will still have to fight an uphill battle on every front to get more international exposure.

Rita (Simonova), an Ukrainian woman, agrees to go to St. Petersburg and serve as a surrogate mother for two gay men in exchange for a hefty sum of money that she needs for the treatment of her sick daughter, Nastya (young and remarkably expressive Serafima Migay).

But like all those doomed characters who start low only to go even lower, Rita finds out the money she was promised is less than she believed it to be, that she will not get it all at once as she expected, but it in installments tied to the progression of her pregnancy, and that she will not be allowed to travel back home to Kiev to visit her ailing daughter because the gay couple insist on having her under their supervision.

When she breaks down, humiliated, he takes the matter in his own hands, goes out to raise help in his own way, but in the process causes a fatal car accident that kills one of the two expecting fathers and leaves the other in a coma. Then he enters a battle with the Chinese by the end of which he is dead, but miraculously leaves Rita enough money to take the next step on her journey.

For after having been told by the doctors that her daughter’s chances of recovery are nil and accidentally hearing that Bedouins heal leukemia by drinking camel’s milk, she takes the money and her daughter and jumps on the next flight to Jordan to find the Bedouins. Instead she falls on Gypsies who rob her blind…but luckily, the miraculous hand of Voloshin’s script intervenes again.

A warm-hearted Russian travel guide (Dinara Drukarova), who just happens to pass by, takes Rita and Nastya to a real Bedouin camp, where the young girl gets to drink camel’s milk. Though she does die at the end, Rita and her new baby are left so much wiser and at peace with the world, sitting in the desert and looking at it all upside down.

If all through the first part of his film, shot and cut with the kind of energy reminiscent of Aleksei Balabanov’s films, it seems Voloshin is intent on painting Russia as a sort of vampire land where people are fiercely sucking each other blood, once he embarks on gang wars and then miracles, it all starts to point in a different direction – a metaphor condemning today’s mega-cities poisoned by greed and moral decay.

A change of pace and the introduction of the bright Middle-Eastern light in the final reel, suggests it is much better to escape into the clean air of the desert and join the Bedouins who are not supposed to care about property or wealth but believe in the true values of life. Somebody should tell the Bedouins about it too.