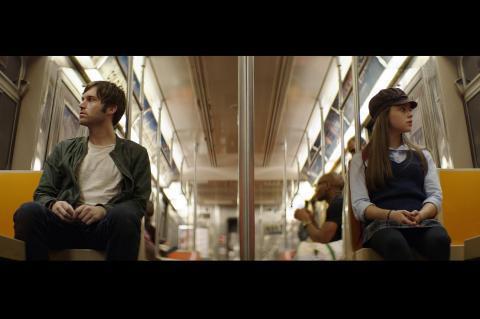 Writer/director/star Shawn Christensen’s extended version of his 2012 Oscar-winning short film Curfew is a stylish and beautifully shot adaptation, strong on performance and a nicely nuanced script, but in the end perhaps lacking an expanded story to suit its feature length. But at its core is the engagingly bittersweet relationship between a suicidal New Yorker (Christensen) and his young preppy niece Sophia (Fatima Ptacek) as they head out into the Manhattan night.

The heartbeat of the film is the increasingly tender relationship between Ritchie and Sophia.

It is a dark and often tense journey through a seedy New York, and while the set-up is rather familiar the strong central performances drive the film engagingly forward. Christensen is nicely skittish as tortured and fractured young man lumbered with a girl he barely know, while Ptacek is a delight as the stone-faced and rather fiercely determined young girl.

The film opens in the sleazy bowling alley where Ritchie cleans toilets. He comes across the body of a young woman in a stall dead from a heroin overdose, which sends the already depressed Ritchie over the edge. He cuts his wrists in the bath, but when the phone rings he answers the call – it is his sister (Emmy Rossum) who asks him to pick up her daughter.

Ritchie reluctantly agrees, and after taking her to her gymnastics class tries to kill himself again, only to find out he is taking pills for menopause rather than to send him to sleep. His sister calls again – this time from jail – and suddenly he finds himself heading into the night, tracked by loansharks; confused why she is in jail, and his boss at the bowling alley (Ron Perlman) is denying there was ever a dead girl in the toilets. It all fuels Ritchie’s already fractured sense of paranoia.

The heartbeat of the film is the increasingly tender relationship between Ritchie and Sophia. She initially can’t bear her uncle, but gradually they become protective of each other and help each other through the dark scariness of the New York night.

There is a delightful central music/dance sequence – an original composition titled Sophia So Far, performed by Christensen’s band Goodnight Radio - in a bowling alley where Sophia dances along one of the lanes, while other bowlers also get into the music. This sequence gives the film a surreal sense of magic. It is a one-off, but it resonates through the rest of the film.