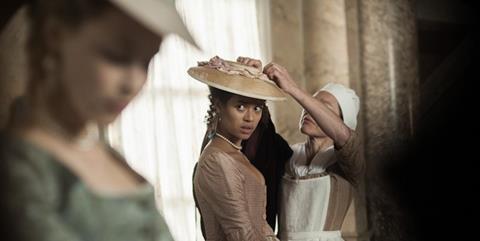 It is almost ten years since Amma Asante made an award-winning directorial debut with A Way Of Life. The long wait for her second feature is amply rewarded with Belle, an elegantly assured period drama that glimpses beyond the frocks and frolics of Austenland to craft a stirring, emotionally charged piece deftly intertwining a journey of self discovery, a powerful love story and a defining moment in the long legal battle to destroy the slave trade in Britain.

Gugu Mbatha Raw is the jewel at the centre of the film; beautiful, spirited and pitch perfect in the fiery emotional conviction she brings to story of a woman whose struggles and successes still resonate down the centuries.

A radiant, star-making central performance from Gugu Mbatha Raw is just one of the pleasures of a handsomely crafted, beautifully written film that will appeal to traditional fans of costume drama and a wider audience drawn in by the astutely rendered complexities of a fascinating true story.

The story begins in 1769 as the young Dido Elizabeth Belle (Lauren Julien-Box) is placed in the custody of Lord Mansfield (Wilkinson) and his wife (Watson). Belle is the illegitimate daughter of Captain Sir John Lindsay (Matthew Goode) and an African slave. Sir John wants the child raised by his relatives with the full support and protection that his name demands.

Belle grows to maturity with her half-cousin, Lady Elizabeth Murray (Sarah Gadon) only vaguely aware of her unique position as Mansfield’s ” notorious mulatto”. She has all the privileges of a gilded cage upbringing but is caught in a social limbo; “too high in rank to dine with the servants but too low to dine with my family.”

When Belle’s father dies, she is left an heiress with a desirable fortune to her name, whilst Elizabeth is penniless and struggling to attract a suitor. This is a society in which a woman can aspire no higher than to make an appropriate marriage that will guarantee her future and enhance her reputation.

The film develops as a story of sharp contrasts from the intertwined fates of Belle and Elizabeth in the marriage stakes to the attention Belle attracts from the aristocratic Oliver Ashford (James Norton) and cleric’s son John Davinier (Sam Reid), a passionate opponent of the slave trade. It is through her contact with Davinier that Belle begins to take an interest in politics and the critical case of the slave ship Zong that is currently under consideration by Mansfield, the chief justice of the land.

Belle creates a detailed portrait of a society that operates along strictly defined rules and what happens when those rules are challenged. We are constantly aware that this is a world in which appearances and propriety are everything and where a woman’s status is measured by the fortune and title she might bring to a marriage.

The triumph of Belle is the lightness of touch that Assante brings to weighty issues of race, colonial oppression, male dominance and searing injustice. There is a remarkable clarity and economy to the storytelling as it balances the personal with the political. The dialogue is scintillating with a withering wit and eloquent turn of phrase that never strikes a false note.

The beauty and precision of the language is relished by a cast of stalwart British character actors who are at the top of their game from a delightful Penelope Wilton as Aunt Mary to Miranda Richardson as the bitchy Lady Ashford and a heartfelt Tom Wilkinson as a decent, caring man struggling to honour the high ideals that once inspired him to create a better world.

Gugu Mbatha Raw is the jewel at the centre of the film; beautiful, spirited and pitch perfect in the fiery emotional conviction she brings to story of a woman whose struggles and successes still resonate down the centuries.