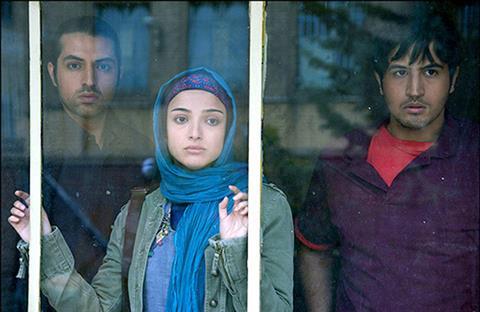 A resolutely theatrical-orientated film, Bending The Rules (Ghaedeye Tasadof), which received a special jury prize at the Tokyo International Film Festival, is a highly watchable story that has at its core issues facing young people in Iran, especially in terms of how they deal an older generation.

Behzadi makes great efforts to offer both side of the argument.

Focusing a young and vibrant theatrical troupe who are planning a trip to perform overseas, the film tackles both cultural and generational struggles, and while Behnam Behzadi’s filming style can be a bit overly showy and repetitive at times, there is an honest energy to the film as it paints neither side as villains simply generations with different attitudes.

Writer/director Behnam Behzadi offers an unusual look into Iranian life, and while the backdrop of a bunch of drama students (some who veer into pretentious territory) may not be as immediately accessible as other new from Iranian filmmakers, it is a fascinating and very watchable take on the familiar class of the generations topic.

The film opens in rather dramatic fashion as a young woman discusses suicide with a series of strangers, but this turns out to be part of a play being directed by Amir (Ashkan Khatibi), whose cast and crew are readying themselves for a trip to an overseas arts festival. Some have lied to their parents while others have stretched the truth, though only lead actress Shahrzad (and impressive Neda Jebraeili) has told her father (Amir Jafari) the truth.

But with the formalities to be sorted out, she finds that he has hidden her passport and refuses to support her taking part in this unchaperoned trip. Her friends help her find her passport by ransacking her flat and breaking into a sealed drawer, just getting away before her father arrives.

He manages to track them to where they are readying their equipment and insists that she come with him. They all try and argue their point, but as things develop it becomes clear that he is not simply taking a proprietarily father role or is basing his decision on prejudice against acting…it is more that she has had issues in the past and had tried to commit suicide and he is reluctant to let her follow what he sees as her latest whim.

Behzadi makes great efforts to offer both side of the argument. In any other film the father may have been a simple foil for the enthusiastic youth, but here both sides have their foibles and can be bombastic and self-interested. Neda Jebraeili is especially good as Shahrzad, and while there is a bit too much indulgent ‘acting’ going from some of the other youthful troupe it is put together in a clever almost improv fashion – heightened by a busy handheld camera which follows them around the multi-leveled rehearsal space – that helps give what could have appeared a static film a whole lot of energy.