Screen spoke to the director about the unique process of making his documentary about the migrant crisis, and how he didn’t emerge from the process unscathed. 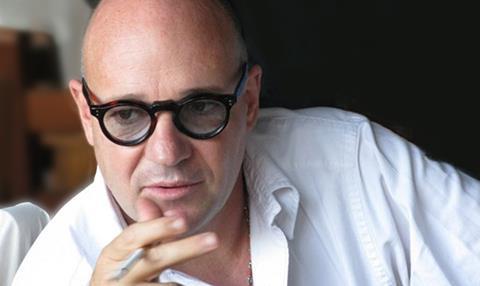 Italian documentary film-maker Gianfranco Rosi’s Fire At Sea has struck a powerful chord at this year’s Berlin Film Festival (Feb 11-21). The film, which explores Europe’s immigration crisis through a candid portrait of day-to-day life on the Sicilian island of Lampedusa, one of Europe’s busiest points of entry, which at the time of writing continues to top Screen’s jury grid, while Screen’s review called it “shocking and intensely human”.

While Rosi has won numerous festival accolades, including the Golden Lion for his 2013 documentary Sacro GRA, he says the level of attention he’s receiving for Fire At Sea is something new altogether.

You haven’t had a film at Berlin since your 1993 documentary short Boatman. How does it feel to be back?

The festival has changed a lot since then, and I have too. But it’s been fantastic, if not overwhelming. I didn’t expect to get this reaction. I was afraid this film would divide people - it’s kind of daring. So far, nobody has come to me saying, “How dare you show us this.”

Do you take that as a positive sign that people are waking up to the scale of the crisis?

I hope it’s a good sign that people are interested, not afraid of learning what is really happening. For me, it was always about portraying normal life on the island - to reflect the island inside of the people. The mystery is what is outside, like the water that surrounds them, that brings death constantly. But you wouldn’t know it from following their daily lives necessarily. This is particularly true now that the rescue operation Mare Nostrum has been put in place, where boats can intercept migrants at sea.

No longer do you see migrants actually landing on the shores. It’s become very official. They are unloaded on a wharf in the old port, bussed to the detention centre and a few days later dispatched to the mainland. Because of this, life on the island can seem like anywhere else. You don’t often see what is happening around you.

What made you want to explore this topic now?

Initially I was asked to make a ten-minute short film that would go to festivals. The producers’ idea was to bring a different picture of Lampedusa to Europe whose sense of the migration crisis is generated by TV and shocking news.

But when I visited in the fall of 2014, I realised it’s impossible to condense into ten minutes. I wanted to tell the story of this tragedy through the eyes of the islanders, whose way of seeing and hearing things has undergone massive changes over the past 20 years. So I decided to move there for a year from early 2015.

The documentary came out slowly, day by day. I wrote a diary of my experiences for a month, and that has evolved to what we have now.

The two main characters, Dr Pietro Bartolo and the 12-year-old boy Samuele, are very natural in front of the camera. How did you find them?

The first person I met was Dr Pietro Bartolo. I had a nasty case of bronchitis and met him in the emergency room. We started talking and he tells me he had been present at every landing of rescued migrants for the last 30 years. He’s the one who determines who is sent to the hospital, who goes to the detention centre, and who is deceased. When I told him I wasn’t sure I could make this film, he handed me a USB stick and told me to watch when I was home [in Rome]. It was filled with very emotional images of the migrants. That’s why I decided to go back.

A similar thing happened with Samuele. My assistant director introduced us and I immediately fell in love with him. But I didn’t know to what extent he would be involved in the film. I remember watching him playing with this bird. I was just watching what was happening, and then I knew I needed to have some stories of kids on the island. Samuele allowed me to see the island differently and with a clarity that I had not known before, and through him other characters were gradually introduced into the film.

Did you shoot Fire At Sea in a linear timeline?

Yes, I just let the story evolve as it should. The beginning was easy, something locals do everyday - with the slingshot, climbing the tree or playing on the motorbike. I never would say, “Today we are going to do this.” One day Samuele told me he had to go to the eye doctor so I said, “Let me help shoot that.”

Another day he said he had anxiety so we went to the doctor and I had my camera. That is the kind of thing no actor could act. This is what I love about my work: reality always comes with such a strong element. Sometimes I would shoot for three weeks and then sometimes I wouldn’t shoot anything. One day I might be shooting in the migration centre because I met some people that took me there; another day I might be with the military on the boat. I just let things happen naturally.

You work as a one-man crew. How does this benefit your film-making?

I have one sound on the camera, and sometimes I use lapel mics on the people. And for the camera, I used the new, lighter Arri Alexa Amira with two lenses - the 18 and 25 [mm]. I could easily use it at night with just a flashlight, which is important for me as light is my character too. I mostly shoot in winter where there is little light, almost when the sun is gone. You can see that in some of the underwater shots. We had to shoot that over a number of days during the ten minutes just before darkness.

The film builds to a climactic, emotional scene out at sea. How did that affect you?

I took two big trips out at sea, 20 days each. On the first trip, nothing happened but it was very important to be with the navy, to get close to the crew and to feel the emptiness. I was free to shoot anything I wanted. The second trip I did, the ship was on the front line, so we did a lot of rescues, maybe 15. It was routine.

But one day we encountered these boats in the middle of the sea. I decided to go down on the raft, and I saw all these bodies coming towards me, almost dead. We realised around 40 people must have died under the ship. I remember thinking, “Should I shoot this?” I felt it was my responsibility to inform people what is really happening. It was horrible. The captain also said, “People need to see this, it’s a tragedy, like the holocaust.” After that, I was done filming. It was the closing for me, that was the break. I had to take several weeks off before starting to edit. I told my amazing editor, Jacopo Quadri, “There is no Plan B. Either it works or we start a new film.”