Tilda Swinton told personal stories of her teenage Bowie obsessions while introducing The Man Who Fell To Earth at a Berlinale Special screening on Friday night. 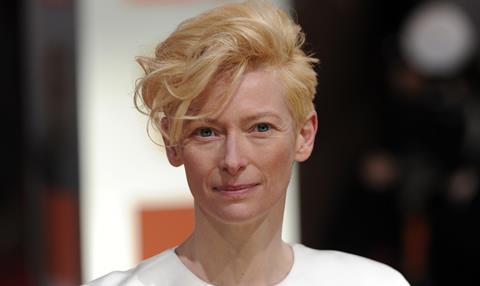 Tilda Swinton was on stage last night at Berlin’s Friedrichstadt-Palast to pay tribute to David Bowie.

She said she took the stage “on behalf of all of us fanboys” and thanked Berlinale director Dieter Kosslick for planning this tribute to Bowie, who died on January 10. “Dieter has done what we’ve wanted someone to do for a month, which is to give an opportunity for us all to be together and sit in the dark and look at the leader of our tribe.” Swinton appeared in Bowie’s The Stars (Are Out Tonight) video in 2013.

She added, “It’s only the Berlinale that would be doing this, it’s a cultural moment. “

The Berlinale hosted a special screening of Nicolas Roeg’s The Man Who Fell To Earth, which festival director Dieter Kosslick was proud to explain, “The film had its world premiere at the Berlinale 40 years ago in 1976, and it has become a cult movie, lasting all this time.” Of course, Bowie lived briefly but importantly in Berlin to record his ‘Berlin Trilogy’: Low, Heroes and Lodger. As Kosslick added, “He was a real Berliner and he has influenced Berlin’s cultural life a lot.”

Swinton said Bowie had been important to her for many years. She recounted some stories of her youth: “I have an interesting relationship to this film, I come from a family that has no connection to film at all, and when I was 17 I was ill in bed with glandular fever and I had read every book in the house. And my mother’s cousin was married to a screenwriter, and he bought me a screenplay to read. I’d never seen a screenplay in my life, and it was The Man Who Fell to Earth. And I’ve always felt a connection to the film for that reason, and also of course the first album I ever bought, several years before I had a record player, was Aladdin Sane, and I used to carry it around with me even though I couldn’t hear it, I could look at that picture.”

She admitted it was “tough” to watch Bowie so soon after losing him, but added a joyful note: “Looks what he’s left us with, acres and acres of sound and vision.”

The film’s British director Nic Roeg, 87, was unable to attend, but his son Luc Roeg (who coincidentally produced Swinton in We Need To Talk About Kevin) spoke on behalf of his father who he said was “incredibly proud of the film”.

“Nic and David had a very close relationship, and he used to talk about how he had to fight to cast him for the role. He knew there wasn’t anyone else he could get to play the role…It’s a fantastic tribute to David and I’m sure the film will stand the test of time.”

Swinton closed the introduction by pointing out the timely themes in this 40-year-old film, especially in a year when the Berlinale is undertaking a number of initiatives to help refugees. “We’re going to watch a great film, a masterpiece I’d say, about a soul who leaves their home and their family in dire circumstances and goes to a pretty hostile place, looking for welcome and refuge,” she said. “This is one of those pictures that couldn’t be more modern.”

The evening had started by playing Bowie classics while the audience entered the red carpet and inside the theatre, from Starman and Ashes To Ashes to Let’s Dance and Suffragette City.

During an interlude when the theatre’s sound was being fixed, Swinton gamely signed autographs and took selfies with dozens and dozens of fans.

And more importantly, there was a huge round of applause when David Bowie’s name first came on screen in the opening credits.