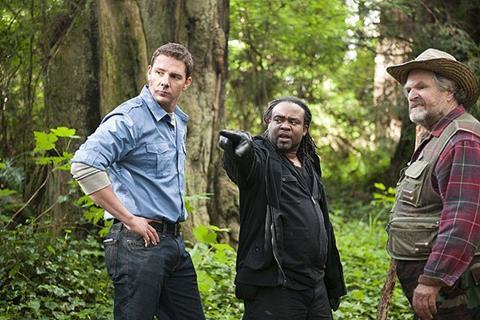 The Bigfoot movies – from family fun through to out-and-out horror – are a nice little cinematic niche sidebar that gets dusted off every few years before heading off into obscurity. Bigfoot: The Lost Coast Tapes is an un-needed addition to the roster as its tries to replicate the style of the excellent Trollhunter with its faux found-footage tale of a band of LA filmmakers foolishly heading off into the wilds in search of the a Sasquatch.

These days such films need a clever twist or at the very least a dark sense of humour and clever characters to convince audiences that the filmmakers aren’t simply going through the motions.

The film, which has had a limited West Coast release prior to its upcoming home entertainment (in truth its more natural home), is unlikely to thrill horror fans who has seen it all so many times before, though it could well crop up on cable channels and DVD labels internationally, though makes the mistake of not layering in enough sex and/or violence to please the late-night brigade.

Sean (Drew Rausch) smells a TV sensation when he and his modest crew – cameraman and best pal Darryl (Rich McDonald), ex-girlfriend producer-cum-New Age psychic Robyn (Ashley Wood) and geeky sound man Kevin (Noah Weisberg) – meet snarling mountain man Carl (Frank Ashmore). When his secure compound is attacked they are initially sceptical, but soon come to believe that big hairy beasties are to blame…and that the Bigfoot are after their blood.

Cue much running around in the woods, screaming and shaking camera shots (as we have come to expect with similar pretend found footage films), though we never get to see much of the actually hairy attackers.

These days such films need a clever twist or at the very least a dark sense of humour and clever characters to convince audiences that the filmmakers aren’t simply going through the motions. Bigfoot: The Lost Coast Tapes offers very little in the way of strong performances, shrewd characterisation or even horror thrills.