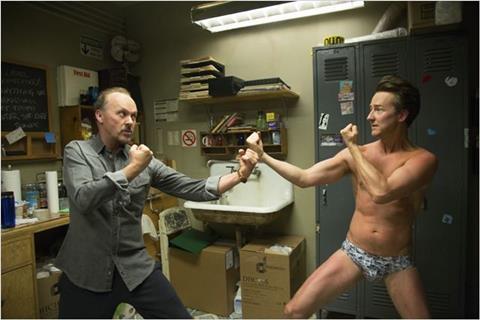 A magnificent and enthralling film that fits into no easy genre bracket, Birdman or (The Unexpected Virtue Of Ignorance) – to give it its full title – is a technical tour de force, a beautifully performed and smartly scripted black comedy that will leave its audience keen to head back for more, perhaps just to work out how Alejandro González Iñárritu staged some of the film’s more striking moments. Plus it finally offers the talented Michael Keaton a role that really shows off his range and charisma and one that should see him in contention when it comes to awards season.

If Michael Keaton is very much the moving, complex and troubled face of Birdman, there is no getting away from the sheer polish and precision that Alejandro González Iñárritu has brought to the film.

Mexican-born Iñárritu – who helped launch the new wave of Latin American cinema with his 2000 film Amores Perros - follows hot on the heels of his countryman Alfonso Cuaron, who opened the last year’s Venice Film Festival with awards favourite Gravity.

Birdman might lack the ‘wow’ factor of Cauron’s disaster-in-space film, but it is just as technically complex in its own right, while also allowing for a series of striking – and often very funny and insightful – performances to drive its enthralling story.

While apparently traditional – the film is the story of a successful middle-aged actor at a creative crossroads and investing all he has on a risky Broadway show – Birdman (which is set to open in the US in October) is a real delve into the mind of a man who is battling internal and external forces (from his ego and dark imagination through to troublesome fellow actors) as he tries to pull together family, career and his own fragile sanity.

What helps give the film its intriguing edge is that Iñárritu attempts to present the story largely in real-time, meaning long and complex takes, extremely clever cutting and intricate staging.

Keaton stars as former cinema superhero star Riggan Thompson, who hopes that staging an ambitious Broadway play (he has adapted a Raymond Carver story, funded the production and also directs and stars in it) will revive his career and see him taken more seriously.

Haunted by his ‘Birdman’ superhero character (in more ways than one – he hears Birdman talking to him, is distracted by the Birdman 3 poster in his dressing room and simply wants to move beyond his Hollywood past) he hopes treading the boards will legitimise him as an artist.

When one of his actors is injured in a freak accident with opening night looming he finds a replacement in the form of loose cannon actor Mike Shiner (Edward Norton), who is guaranteed to help sell tickets but has a reputation for being trouble. Shiner is in a relationship with the play’s lead actress Lesley (Naomi Watts), but Riggan’s best friend – and the show’s producer – Jake (Zach Galifianakis, playing things pretty straight) knows his profile will help sell tickets.

As the show heads towards opening night Riggan must deal with Shiner’s massive and challenging ego; the gentle demands of his girlfriend and co-star Laura (Andrea Riseborough); worries about his fresh-from-rehab daughter Sam (Emma Stone), who is also working as his assistant; visits from supportive ex-wife Sylvia (Amy Ryan), as well as trying to convince famously barbed theatre critic Tabitha (Lindsay Duncan) not to savage his Broadway debut.

The play that Riggan mounts at New York’s historic St. James Theater  on 44th Street is based on Raymond Carver’s short story, What We Talk About When We Talk About Love, with the story reflecting Riggan’s own search for love and acceptance. The theatre – from its weaving corridors to its roof-top views over the city – is a vital character in the film, just as are the teeming New York streets and dingy bars when the characters make brief outside trips from the venue.

Michael Keaton is superb as the tormented Riggan. Clearly the fact that he played Batman in Tim Burton’s two Batman films carries considerable resonance, but he has a rare ability to easily blend comedy and drama as well being a great physical performer, seemingly at ease with the complex shooting style of the film. He is perfectly balanced by Edward Norton’s delightfully monstrous Mike Shiner – the pair may be character mirror images, but they also provoke, challenge and bring out the best in each other.

Norton has a lot of fun with the role – Shiner’s hilarious on-stage erection is a classic moment – and dovetails perfectly with Keaton’s easy comedy style. In fact, the rest of the cast are also impressive. Naomi Watts and Andrea Riseborough have gently powerful moments, while Emma Stone’s Sam takes on a larger role as the film draws on.

But if Michael Keaton is very much the moving, complex and troubled face of Birdman, there is no getting away from the sheer polish and precision that Alejandro González Iñárritu has brought to the film. The pure sense of control – working in beautiful tandem with cinematographer Emmanuel Lubezki – is astounding, with the film likely to feature strongly when awards are being handed out.