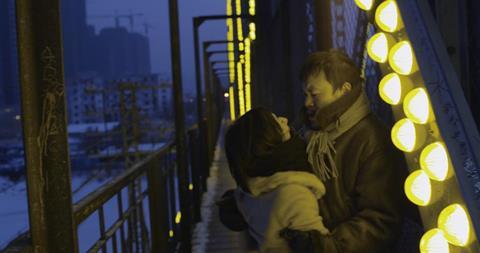 The unadorned, unflattering, raw and lifelike portrait of a mid-size Northern Chinese town in winter, all frozen and covered in thick layers of snow, is the best thing in Black Coal, Thin Ice (Bai Ri Yan Huo), the new film from  Diao Yinan (Night Train). What’s missing is a solid, well-told plot to keep audiences alert and justify the painstaking trouble taken with the background.

Once the case seems to be solved, there is a coda, the plot twisting itself around once more for the final revelation, before ending in a spectacular display of fireworks.

The film is a mystery story presented almost exclusively from the point of view of an ex-cop, and dealing with a series of grisly murders, with the victims’ bodies chopped to pieces and spread over a large territory, hundreds of miles apart. It is an interesting premise but its credible, authentic background, cannot fill the yawning gaps left time and again in the plot.

Divorced policeman Zhang Zili (Liao Fan) is seriously wounded and two of his colleagues are killed while attempting to arrest a couple of culprits suspected of having committed the first in this series of crimes. Once released from hospital after a long convalescence - or so it seems - he is retired from the force, has to take on a job as security guard and drowns his frustration in alcohol.

Five years later he understands, after meeting Wang (Yu Ailei), an old colleague who is now a police inspector, that more crimes of the same kind had been committed and gone unsolved and decides to go investigating on his own, if only to give a sense to his empty existence.

All the victims seem to have been connected at some time with the same woman Wu Zhizhen (Gwei Lun Mei, looking forlorn, lost and melancholy) who works in a small laundry. He tries to approach her, inevitably falls in love with her but, once a lawman always a lawman, and he goes on digging for new facts and information that might reveal the identity of the truth.

From this point on, major leaps of faith are required to follow the story. You have to ignore all the red herrings strewn throughout; the dead men identified beyond the shadow of a doubt, who are apparently not so dead, and a lead suspect arriving in the story out of thin air.  Once the case seems to be solved, there is a coda, the plot twisting itself around once more for the final revelation, before ending in a spectacular display of fireworks.

With the help of an experienced script editor in pre-production, the same story with the same ingredients, but put in a different order, (and with some more work on characterization) could have the potential of turning this film into a real detective story, with the vast variety of characters revealed through the investigation turning out to be as relevant.  For suspense and tension, the structure of each scene would need to be altered and the flow of information going from the screen to be changed as well.

As it is now, the one thing that an audience can hope to latch onto is the realistic feeling of each frame, offering the equivalent of a visit to one of the more remote and less fashionable corners of China, at one of the less attractive times of the year.