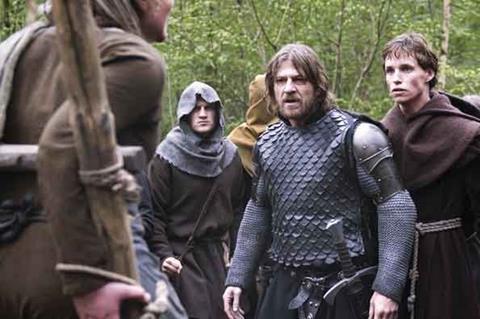 Christopher Smith’s chilling and gritty medieval horror-drama is an impressively staged film, closer to Witchfinder General in tone and content than to out-and-out horror films, but confirming the British director as a talent to keep on watching. The dark tone and lack of big-name stars will hamper the chance of break-out success, but it will be a must-have title for genre film festivals.

Following contemporary horror outings with his last films Creep, Severance and Triangle, Smith makes a bold move in using the medieval backdrop for his latest film, largely shooting on location in Germany. He does an impressive job in capturing the gloom and grimness of a country being decimated by the Plague, and a society torn between religion and paganism.

Set in 1348, the film follows stoically religious knight Ulric (Sean Bean, perfectly cast) who is leading a group of torturers to try and find a remote rural village which is rumoured to completely free of the plague. The assumption is that dark magical forces must be in play to keep the village safe.

Accompanying them is novice monk Osmund (Eddie Redmayne), who knows the area. The band eventually stumble across the remote community, only to find it in the thrall of playfully seductive sorceress Langiva (Carice van Houten, almost unrecognisable with blonde hair), who appears to have the power to make the dead walk again.

Rather than rely on gore or more run-of-the-mill horror tricks, Smith instead focuses on gloom, grittiness, superstition and faith, while also punctuating proceedings with a superbly (and bloodily) staged fight scene between the group and a band of feral killers and a wonderfully staged climax that is closer to The Deer Hunter (as the knights are held in a watery cage and one-by-one selected to be sacrificed) than your usual medieval romp.

Ulric and his band also drag around with them a gruesome-looking torture wagon, which is there more as a terrifying presence than an actual device for extracting the truth, while the theme of the plague – the black death of the title – clearly has contemporary references to various pandemics.