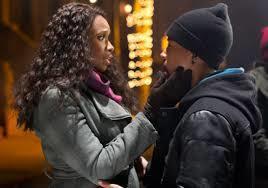 Vividly staged and refreshingly light on Christmas schmaltz, writer-director Kasi Lemmons’ Black Nativity reinvents poet Langston Hughes’ sixties play of the same title as an engaging contemporary musical drama. This classy holiday season offering should connect with upmarket black and religious audiences, though turning it into a crossover success might be a challenge for worldwide distributor Fox Searchlight.

Having characters break into song during scenes of naturalistic drama can be tricky, but Lemmons pulls of the transitions and finds inventive ways to stage the song sequences.

Searchlight has set a wide North American opening for Nov 27, at the start of the long Thanksgiving weekend, when the film will be competing for the African-American audience with specialised release Mandela and holdover The Best Man Holiday. Prospects will be more limited in many international markets, but early openings - like the Dec 6 UK release - should maximise box office potential.

Lemmons (whose last feature was 2007 drama Talk To Me) names her protagonist after Hughes but otherwise uses the play more as inspiration than source material. Her Langston (played by (Jacob Latimore, from Vanishing On 7th Street) is a bright but unhappy teen who, when the Baltimore home he shares with his mother (Dreamgirls’ Jennifer Hudson) is threatened with foreclosure, is sent to New York to spend Christmas with his estranged grandparents, the strict Reverend Cornell (Forest Whitaker) and his kindly wife (Angela Bassett).

Langston’s determination to help his mother and reunite her with the family come to a head during a rousing Christmas Eve staging of the Hughes play at the Reverend’s church.

Having characters break into song during scenes of naturalistic drama can be tricky, but Lemmons pulls of the transitions and finds inventive ways to stage the song sequences, which become more elaborate and stylised as the story goes on. She’s helped by a cast that handles the music just as well as the drama.

The songs - originals by musician and producer Raphael Saadiq mixed with a few traditional numbers - are mostly hip-hop tinged soul ballads performed by the stars or by supporting cast members including singer Mary J Blige, Tyrese Gibson (from Fast Five) and Nasir Jones (better known as rapper Nas). Though none of the compositions stand out, the performances are uniformly strong.