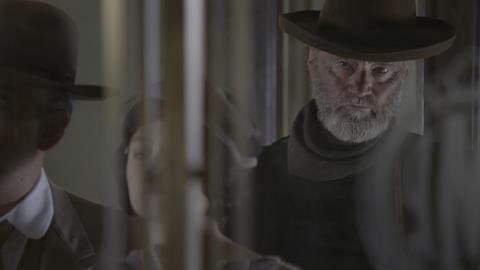 The conceit of Blackthorn is that after his disappearance in Bolivia in 1908, Butch Cassidy lived there quietly as a rancher named James Blackthorn until the 1930s, when his nostalgia for home proved too strong a temptation and led to his downfall. It is one thing that robbing banks is a more dynamic activity than sitting quietly on one’s property and enjoying the views, but this film is more a series of uncharged photographs of gorgeous natural settings in Bolivia than a fluid narrative— rather like Leone on Lithium, with the unending salt flats that form a backdrop to what little action there is are impressive.

The film might as well have the word Europudding stamped on its credit sequence.

Sadly for Blackthorn - directed by Mateo Gil, a respected Spanish screenwriter (The Sea Inside, Open Your Eyes) -all the flashbacks in the world (and there are plenty of them here) cannot energise this enterprise. It is an Inactioner. An English-language picture (with only one American actor, Sam Shepard, a fine playwright but hardly a box-office draw, not to mention a pretty performer lacking the masculine gravitas of Leone’s cowboys, roles which launched impressive careers), it will satisfy no one seeking out a western.

Commercial prospects worldwide are slim at best. Is it not strange that of the other leads, three are Irish, one Danish, one Peruvian, and one Spanish? The film might as well have the word Europudding stamped on its credit sequence.

The few events in Blackthorn feel like filler: Blackthorn’s affair with an indigenous woman named Yana (Solier) and the revenge exacted upon her by her tribeswomen; the presence of the wealthy, misunderstood Mackinley (Rea), who educates Blackthorn on the exploitation of Bolivan labourers by foreigners; and the pairing up for purposes of escape and loot of Blackthorn with the treacherous engineer Eduardo Apocada (Noriega, a fine actor possibly cast—miscast, to be precise - to appease Spanish financiers).

Historians of Americana agree that the official “closing” of the U.S. frontier was declared during the last decade of the 19th century—just at the time the Lumieres began projecting film in Paris, and movie theatres became immensely popular, especially in the US. Cinema scholars agree that celluloid allowed Americans to continue their obsession with the Old West, with the Western becoming the mainstay of the medium - it was, and is, the most American of genres.

The States do not have a monopoly, however. Many other nations have attempted to make westerns, almost laughably unless they are culturally transformed. The great exceptions are the Italian “spaghetti westerns,” mostly because of the incomparable Sergio Leone. He merged a European aesthete’s eye (his) and ear (Ennio Morricone’s) with a nearly affectless but weighty American macho presence—Clint Eastwood, Lee Van Cleef, and Charles Bronson, for starters—and, an important component of the recipe, action. There was nothing stagnant about the Old West or the movies that were set there.