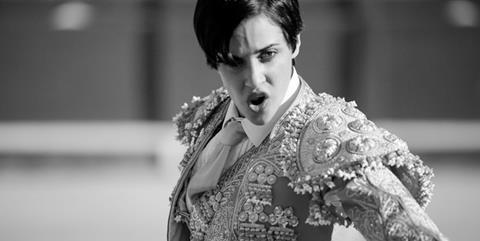 Hot on the heel of The Artist comes Pablo Berger’s beautifully shot Blancanieves (the Spanish name for “Snow White”), an evocative European silent melodrama that sets the oft-told (especially this year) Snow White story against the 1920s backdrop of the bullfighting arenas of Spain. While it lacks the laughs and knowing sense of silent Hollywood that made The Artist such a success, the performances (especially from a trio of terrific Spanish actresses) are excellent and the black-and-white cinematography atmospheric.

The film, which had its world premiere at the Toronto Film Festival, and also screens at San Sebastian, is an engaging homage to both silent cinema and the golden days of the iconic toreros. The success of The Artist may well make it appealing to smart distributors, and festival showings will be pretty much guaranteed.

Young Carmen (played as a child by Sofía Oria, and later by Macarena García) is the daughter of once-legendary matador Antonio Villalta (Daniel Giménez Cacho), crippled in the ring and still grieving for his wife, who died during childbirth.

The wheelchair bound Villalta soon marries his conniving nurse Encarna (Maribel Verdú), leaving Carmen to be brought up by her former flamenco dancer grandmother (Ángela Molina). Encarna plans a nasty fate for Carmen at the hands of her chauffeur, but Carmen manages to escape but after hitting her head and losing her memory she is helped by a travelling troupe of bullfighting dwarves, eventually rising to fame in the corrida under the stage name Blancanieves.

Ángela Molina, Maribel Verdú and Macarena García are terrific as the three generations of Spanish women, all glowing with passion and fiery beauty and giving the film a real sense of vibrancy and urgency. Maribel Verdú probably has the most fun in the ‘wicked Queen’ role – replete with poisoned apple – with her character’s prim and lethal beauty nicely balanced by moments of humour…best of all comes when her supposed cover article about her new home is dumped for an story about Blancanieves, leaving her with a small article and a picture of the back of her head.

At the same time the short-haired Macarena García is blessed with a warm beauty and gentle passion, especially as her innate bullfighting abilities come to the fore, and she is finally recognised as the daughter of a master when she faces a snorting bull.

The film is delightfully carried along by Alfonso de Vilallonga’s moving and atmospheric score and Kiko de la Rica’s lustrous cinematography,which makes great used of the smaller frame. Pablo Berger’s film – clearly a labour of love – deserves to find a welcoming home, and fans of silent cinema should try and track it down.