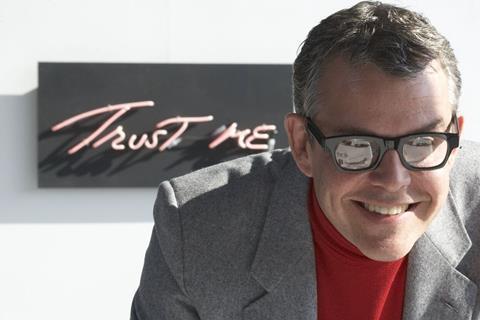 Boogie Woogie is a plucky attempt to craft the kind of all-star, multi-story mosaic that came so naturally to the late Robert Altman. The art world is fertile ground for any budding satirist but the subject matter already feels stale and whilst it raises the odd smile, Boogie Woogie never hits the mark as a trenchant morality tale. The stellar cast might prove an attraction for an older demographic but it is difficult to discern a theatrical audience for Duncan Ward’s debut feature.

It is easy enough to snigger at these shallow lives and grasping individuals but the film struggles when it requires them to be taken seriously.

Danny Moynihan’s novel Boogie Woogie offered scathing vignettes of the 1990s New York art scene and the author has shifted the setting to London for his own screen adaptation.

The focus here is on the friendly rivalry between rapacious art dealer Art Spindle (Danny Huston) and prolific collector Bob Maccelstone (Stellan Skarsgard). The competition intensifies over the purchase of a Mondrian Boogie Woogie painting owned by the elderly, impoverished Alfred Rhinegold (Christopher Lee). Rhinegold stubbornly refuses to sell but his wife Alfreda (Joanna Lumley) might be more amenable, especially when the offers start to nudge the £20 million mark.

The fate of the Mondrian painting threads through a loose narrative which stretches to include the amorous antics of Macclestone’s restless wife Jean (Gillian Anderson), Spindle protege Beth (Heather Graham) and her decision to establish her own gallery, punky lesbian artist Elaine (Jaime Winstone) and the various betrayals, deceptions and background scheming that swirls around them.

Boogie Woogie takes some easy potshots at people who know the price of everything and the value of nothing. Christopher Lee’s Rhinegold is the film’s last apostle of decency, clinging to the Mondrian because he bought it directly from the artist and it is has a significance that transcends filthy lucre. Everyone else is simply out for what they can get, whether that is money, sex or fame. Spindle’s office is dominated by a sign saying Trust Me, underlining the obvious irony that flavours the film.

It is easy enough to snigger at these shallow lives and grasping individuals but the film struggles when it requires them to be taken seriously. The sketchy nature of the storyline results in predictable mini-dramas with little depth or substance, such as the Tracey Emin-like Elaine using footage of her sexual conquests in a video installation, or Bob and Jean’s marriage ending in a squabble over paintings, property and poodles rather than emotional issues. These are shallow individuals whose collective lives never coalesce into a gripping narrative.

The performances of the ensemble cast vary from the exaggerated to the personable with Stellan Skarsgard’s wry, rueful Bob one of the most naturalistic and engaging in the ensemble. Danny Huston’s Art has a touch of the pantomime villain to him as the actor employs a repertoire of insincere smiles and staccato cackles to suggest the empty bonhomie of a relentless opportunist.