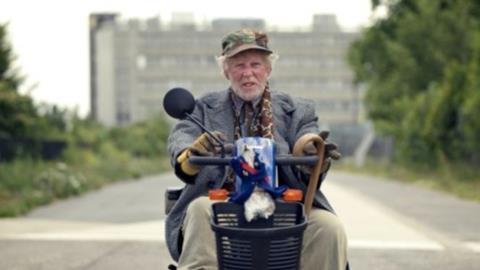 There are echoes of Shane Meadows and flavours of Bill Forsyth in Borrowed Time, an auspicious first feature from writer/director Jules Bishop. The unlikely bond between a teenage delinquent and a curmudgeonly old recluse is explored with a combination of wit, pathos and finely nuanced performances.

Bishop eschews easy sentimentality in Borrowed Time, creating characters that are full of contradictions and flaws.

The result is a heartwarming, low-budget British feature that should benefit from positive critical support and strong word-of-mouth audience appeal. It is just the kind of film to attract a smaller UK distributor committed to homegrown talent and should travel widely on the Festival circuit. The film premiered at the Edinburgh International Film Festival.

The latest offering from London’s Microwave scheme for low-budget features delights because it eschews the clichés of urban youth dramas and draws out something positive from the gloom of broken Britain. Kevin (Theo Barklem-Biggs) is a London teenager described by one character as “pasty and a bit like Gollum”.

A disappointment to his sister Becky (Juliet Oldfield) and a joke to his mates, Kevin seems to have spent his life being told he will amount to nothing. Desperate to retrieve the clock he stole from his sister’s flat, he falls victim to psychotic, criminal ‘Ninja’ Nigel (Warren Brown). He breaks into the house of grumpy old Philip (Phil Davis) intent on theft but discovers common ground with someone who feels as lonely and vulnerable as him.

Bishop eschews easy sentimentality in Borrowed Time, creating characters that are full of contradictions and flaws. His dialogue is fresh and funny and there is an endearing strain of whimsicality in the film that includes a running gag comparing the gun-totin’ Philip to Clint Eastwood’s Dirty Harry. Warren Brown’s performance as the villainous Nigel is a little too cartoonish to chime with the rest of the film but otherwise this is carefully balanced and well judged.

Theo Barlem-Biggs brings something of the young John Gordon Sinclair to his performance as the gullible, soft-hearted Kevin and Phil Davis is on grand form as Philip, deftly revealing the pain and heartbreak beneath his gruff exterior. They make a winning, odd couple combination.