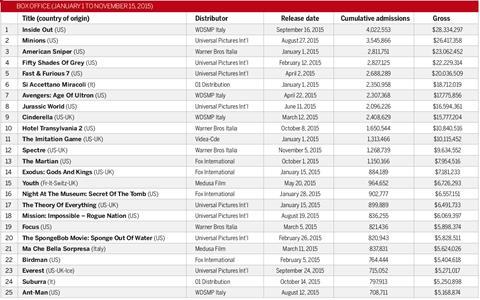 Still, the numbers are nowhere near 2013, when the top 10 films grossed $239.3m and breakout local title Sole A Catinelle raked in a record-breaking $69.9m.

Animated films including Inside Out, Minions, Hotel Transylvania 2 and SpongeBob, as well as Cinderella, have all fared well, confirming the enduring appeal of family entertainment over illegal downloads.

Last year, three low-budget Italian comedies made the top 10 but in 2015 only one local film, Alessandro Siani’s Si Accettano Miracoli, has broken into the top ranks so far. The religious comedy opened in January with a very strong $8.5m and has gone on to gross $18.7m, beating 2014’s A Boss In The Living Room (Un Boss In Salotto), which had taken $16.6m by the end of its run.

Several Italian films for which distributors have high hopes have only just been released, including Paolo Costella’s comedy Matrimonio Al Sud, which has taken $ 1.3m in its first weekend, and Massimiliano Bruno’s Gli Ultimi Saranno Ultimi which has grossed $1.1m in its first week.

Warner Bros Italia’s Spectre is on course to become one of the highest grossing films of the year in Italy, taking $9.6m from just two weeks on release, helped by two stunning scenes shot in Italy.

Two UK films about geniuses — The Imitation Game and The Theory Of Everything — also fared well, although The Imitation Game soundly beat its rival, taking $10.1m as opposed to $6.5m. The two have consistently jostled for position at the European box office this year.

Working Title Films’ Everest has also made it into the top 30, taking $5.3m, while the other international film to make a mark is French comedy and European box-office hit Serial (Bad) Weddings (titled Non Sposati Le Mie Figlie in Italy).