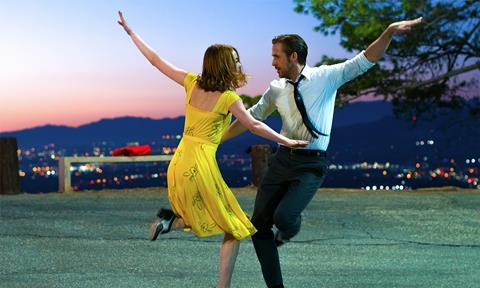 The musical romance, which has delighted critics and audiences alike, made £4m between Monday-Thursday to bring its current UK tally to £10.5m.

The film is now set to expand from its 606-site opening – Lionsgate UK’s widest ever release – to nearly 660 screens this weekend.

For an independent, non-franchise movie, that is an enormous number and an encouraging story for the independent sector.

At 660 sites, the film would become one of the most-widely released movies since records began in the UK.

Few releases have surpassed this figure. Star Wars: The Force Awakens and The BFG are among them, both having played at 680 sites in 2016.

La La Land was Lionsgate’s fourth-largest UK debut ever, one-third bigger than the first Hunger Games – which opened at £4.9m from 511 sites in 2012 – and only behind the three Hunger Games sequels.

While the record site opening was something of a risky bet, Lionsgate UK executives are now bullish that the film will reach north of £25m by the end of its run.

“We went for it and the result has been phenomenal. The film is thriving everywhere. Hopefully the Oscar nominations on Tuesday will give it another boost.”

The film has crossed $80m to date at the US box office, where a platform release strategy means it has yet to cross 2,000 screens.