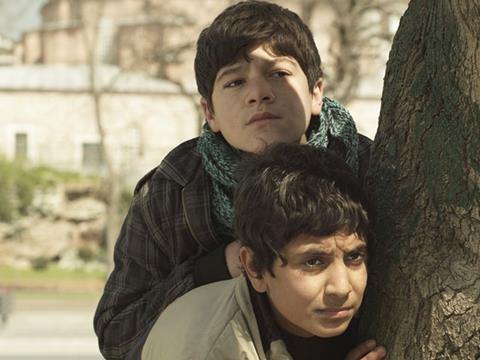 Seyfettin Tokmak’s first solo flight in feature films is a well-intentioned but loosely packaged melodrama about  street life in Istanbul’s lower depths, built around two street urchins trying to make it to Germany - where (as everyone knows ) all streets are paved with gold, without having the slightest notion how to go about it.

The one asset the film can easily claim in its favour, is the unflattering portrait of Istanbul it draws on all through.

Shot on location, with plenty of authentic colour and wallowing in a sea of weepy clichés intended to draw audiences to sympathise with the two victimised kids, this will have a limited appeal once it steps outside its homegrown territories. Broken Mussels (Kirik Midyeler) screened in competition at the Sarajevo Film Festival.

Hakim (Ugur Baris Mehmetoglu) and his cousin Faysal (Seydo Celik), two waifs who left their native village and came to Istanbul on their own, are supposed to make some money in the big city and send it home to their families.

Hakim, older and rougher, doesn’t mind lying, stealing, cheating and any other kind of streetwise trick that will bring him closer to his cherished dream, reaching his relative Selim who lives in Germany. Faysal, younger and softer, less assertive and determined, tends to tag on, not quite sure why.

They both share a fleapit room in a rundown flophouse, operated by ultimate villain Cevat (Engin Benli) who deals drugs, beats up women, terrorizes his penniless tenants and deals in everything that is illicit, illegal and disgusting, including human organs.

Among his victims, a Bosnian woman, Medina (Selma Alispahic) whose daughter Elma (Ipek Kizilors) needs a heart operation. Medina is sent by Cevat to Bosnia but never comes back, and Elma joins by the end of the film Hakim and Faysal, who manage to bungle every single miserably misconceived ploy they dream up for making money. Finally, when through no merit of their own, they get their hands on some money,  it turns out even that doesn’t buy them a passage to the promised land, Germany.

Moving around in circles without ever really going anywhere, Kenan Kavut’s script relies mostly on separate incidents, each transparent and doomed to fail from the very beginning, easily outguessed by the audience, and offering no additional perspective to the story.  A Russian girl punished for hiding her baby from her loutish employer, Elma, girl with a heart condition but nevertheless running around with the two boys, her mother selling her blood and then her kidneys to save her daughter, all this may be true to life but has been exploited so many times before on screen that not many people can still be moved by it.

Limply directed and populated by an amateurish cast with little experience or presence in front of the camera, the one asset the film can easily claim in its favour, is the unflattering portrait of Istanbul it draws on all through. The last few frames however are almost comical: speeded up images of boats, ships and huge tankers, racing on the Bosporus from one end of the screen to another. If it is a prank, it comes up at the wrong end of the film.