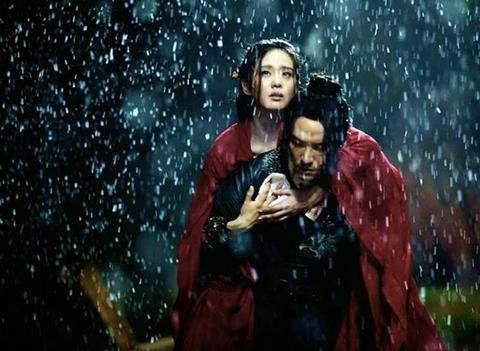 A flowing, impressive and nicely nuanced period actioner packed with terrific fight scenes and eschewing over-used wire-work, Lu Yang’s Brotherhood Of Blades is engagingly complex (as so many similar Chinese period films are) but also easy to follow and embrace, and certainly one of the best costume Chinese action films for a while. For a change, virtually all of its characters are driven by money rather than honour, which gives it a rather novel spin and oddly makes its characters more realistic and sympathetic.

The film’s action scenes are impressively staged resulting in a memorable and classy action film that may lack the star names but more than makes up for it with stylish and wonderfully choreographed fight sequences.

The backdrop of sword-wielding heroes taking on the Ming’s dastardly secret police may well be familiar to fans of wuxia cinema, but the film – which opened in China in August and screened at the Busan International Film Festival – is engagingly without pretension and is smartly constructed as it focuses on fights and drama with only occasional side-steps to gentle melodrama. It smartly avoids base humour, which should make it more accessible to international audiences who like their Chinese period action films tough and stylish.

Set in the 1620s, the backdrop of the story is the fall of Wei Zhongxian, head eunuch and head of the imperial assassins, who had been in control of the Imperial court for eight years, but who lost his power when Emperor Chongzhen came to power. The story of Brotherhood Of Blades focuses on three imperial assassins commissioned with tracking down followers of Wei – part of the ‘eunuch clique – and also eventually sent to kill Wei himself.

The fact that the three are not traditional heroes driven by honour and loyalty is what gives the film its quirky edge. Chang and Wang especially are good as mature fighters driven by outside forces (Ethan Li’s role is the more traditional genial younger man part), and when their decisions see them caught up between Wei’s killers and manipulated members of the imperial assassins their sense of ‘brotherhood’ shines through as the film spirals through an impressive series of action scenes and ends in an appropriately dark and oddly moving climax.

Of the support cast, Taiwan’s Chin Shih-chieh has fun as the barking mad and snarlingly evil Wei; Cecilia Liu is gently charming as the courtesan Zhou Miaotong, caught between the love of two men, and Zhou Yiwei is striking as the arrogant blackmailer who has to make some tough decisions. The only disappointing role is Dani Zhu’s thinly drawn daughter of the local doctor treating Jin – she is given little to do but simper and be threatened.

The film’s action scenes are impressively staged – favouring old-fashioned close-up bludgeoning sword-play and martial arts rather than wire-work, flying and epic battles – resulting in a memorable and classy action film that may lack the star names but more than makes up for it with stylish and wonderfully choreographed fight sequences.