Bullet To The Head 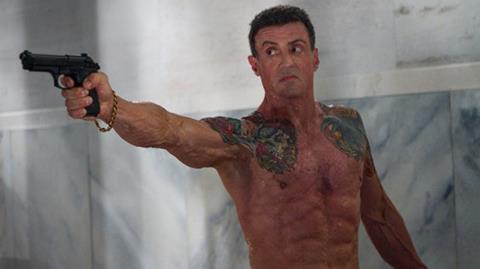 Right from the tagline – “Revenge never gets old” – you know that veteran director Walter Hill’s first feature since 2002’s Undisputed is not going to be big on originality. But if buddy-movie Bullet To The Head rolls out just about every cliché in the book, at least it does so with a certain sass and panache. The film’s tongue-in-cheek tone – embodied above all in some tasty one-liners – outsmarts its creaky plot and risible macho poses. And 66-year-old Sylvester Stallone finally fesses up to no longer being a spring chicken in a role that deliberately plays up his old-school credentials. His drawl gets slower and his moves stiffer with every film, but at least Bullet runs (indulgently, it must be said) with the senior-citizen premise.

Bullet To The Head is difficult not to like. It’s as silly as the utterly choreographed final axe fight, and as enjoyable.

The Expendables made Stallone bankable once more, though there he was surrounded by a bunch of other retro action veterans. Sung Kang is likeable here as a Fed who teams reluctantly up with Sly’s ageing hitman to hunt down a common enemy, but Bullet To The Head is essentially a Stallone-alone vehicle: and as such, will appeal to older audiences who like their shoot ‘em up thrills mixed with some humour-tinged nostalgia for the good old days of the genre.

Set in a New Orleans that never feels much more than a theatrical backdrop, Bullet starts off as it means to go on - briskly, hoping we don’t notice the cracks in the story. A paint-by-numbers intro forges an uneasy alliance between gun-for-hire Jimmy Bobo (Stallone) and Taylor Kwon (Kang), the Federal cop of Korean origins whose former partner Jimmy was paid to snuff out.

The baddies are a cartel of corrupt property developers led by Baptiste (Slater) and Morel (Akinnuoye-Agjabe), who employ hitman Keegan (Momoa) to do their dirty work – which includes rubbing out Jimmy’s hitman partner. Taylor meanwhile is stitched up by his corrupt city-cop colleagues, who are in the pay of Morel and resentful of this cocky young Fed with his DC ways.

Once Jimmy and Taylor are buddied up like frosty lovers in the first act of a rom-com, we get some entertaining verbal sparring between Stallone’s ‘shoot first, talk later’ former marine and Kang’s upright young detective who can track suspects in seconds via his smartphone – a techno-gizmo that Jimmy scorns.

It’s revealed that Stallone’s muscular mercenary has a daughter – tattoo-artist Lisa (Shahi) – who serves first as a sparky source of tension between eligible Taylor and disapproving dad, then as a hostage pawn to lure the two to the disused power station (New Orleans’ Entergy Plant) that provides the location for the final shootout. The fact that the same location served a similar purpose in Walter Hill’s first feature, the Bronson-starring Hard Times (1975), makes up a little for the fact that we’ve seen shooter showdowns in the carcasses of industrial buildings a million times before.

Shot with Michael-Mannish urban noir atmosphere by cinematographer Lloyd Ahern, complete with flashgun cuts and desaturated colour flashbacks, Bullet to the Head presents a stylish enough package. But it’s a style that feels more than a little derivative. Twangly guitar solos accompany aerial cityscape bridging sequences, Jimmy hides out in a shack in the bayou (though Hill thankfully spares us the crocodiles) and one key scene takes place at a – guess what? – Mardi Gras party.

In the film’s oldies’-view world, nobody seems bothered that a flash drive which the villains are desperate to get back has no real value as a bargaining pawn, as it could have been copied a thousand times in the interim. And in a cinematic equivalent of those large-type books carried by certain libraries for the vision impaired, a key file of evidence comes with EVIDENCE printed in capitals on the cover, as an aid to the hard of understanding. But in the end, who cares? For all its preposterousness, Bullet To The Head is difficult not to like. It’s as silly as the utterly choreographed final axe fight, and as enjoyable.