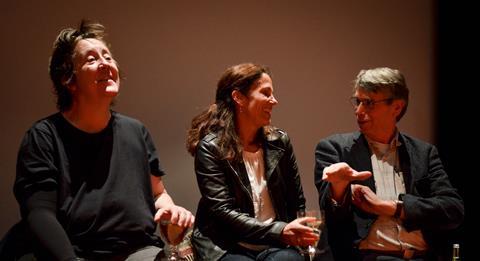 Todd Haynes’ critically acclaimed double Cannes-winning film Carol has been praised for being “an exquisite work of American art,” “a deeply felt love story that teases out every shadow and nuance of its characters’ inner lives with supreme intelligence” and a beautiful feat of “near flawless” filmmaking.

It is also a feat of producing and reflects the professional partnership of two of its producers (the third producer is Stephen Woolley, Elizabeth’s partner at Number 9 Films) the BAFTA and Emmy nominated Elizabeth Karlsen (The Crying Game, Made in Dagenham, Little Voice) and the Emmy nominated, Independent Spirit Award winning Christine Vachon (Still Alice, Far From Heaven, Boys Don’t Cry), who are also long-term friends.

Speaking to National Film and Television School (NFTS) students, Elizabeth Karlsen explained how both she and Christine, when they were in their 20’s, had read and loved Patricia Highsmith’s 1952 novel The Price of Salt, on which the screenplay for Carol is based. The story, set in New York, is about the love affair between a young shop-girl and a beautiful older married woman called Carol at a time when lesbian relationships were considered immoral. It was so outrageous that the author had to publish the book under a pseudonym.

“It’s a book that every generation of women, including Christine and I, seem to ‘discover’ in their 20’s and feel passionate about, but no-one had been able to find a way to turn it into a film,” said Karlsen.

She was first approached about 13 years ago by Phyllis Nagy who pitched her screenplay for Carol, which Karlsen immediately jumped onbut they weren’t able to go ahead.

“I had three young children and the rights were tied up and I had a sense that this wasn’t the right time to do this; I didn’t feel I would make the movie that I wanted to make then.”

Eleven years later when the rights to the novel became free, Karlsen rang the publisher but they still refused to sell them. But Karlsen wouldn’t take no for an answer. “I was so obsessed with the book that I had to find a way. So I said ‘please, I will fly over if you’ll just let me take you out to lunch.’ They agreed, in principle, after a successful lunch but to clinch the deal Karlsen asked Tessa Ross if she could fly her lawyer and a Swiss lawyer over to meet the publisher’s lawyer. “I Just had a sense that what we needed to do was to get the lawyers together to sit in a room until we’d signed the deal.”

It worked. Karlsen began developing the project with Tessa Ross - but it stalled again after a series of directors came on board and then had to leave. Karlsen and Vachon have been friends for many years and it was during one of their regular telephone calls that they realised that Todd Haynes was available to direct the film. 48 hours later, Haynes had read the script, was bowled over and came on board.

Vachon credits Karlsen for enabling the film to be made. “Before Phyllis’s script, there was a version that had done the rounds but it wasn’t makeable. It didn’t have that quality that would attract a director or a star. It wasn’t until Liz (Elizabeth) got hold of it that she made it into a something that did all of those things. That was critical because that’s the difference between a great idea that everyone loves and a movie that can actually happen.”

The film version of Carol, starring star Cate Blanchett and Rooney Mara, starts at a point in the narrative that is actually near the end of the novel. Asked how the screenplay by Phyllis Nagy differs from the book, Karlsen referenced the change in point of view and added two other important changes: “In the book there is a long, long road trip, pages and pages, and Therese goes to work on a ranch. Phyllis filleted and streamlined the story and cleverly changed Therese from an aspiring set designer to a photographer because it feeds into the theme of the female gaze, desire and the image of Carol.”

Phyllis Nagy worked closely with Todd Haynes who brought back elements of the book and added the framing device, which is a deliberate nod to David Lean’s romantic masterpiece Brief Encounter. Nagy had been wary of interference from directors in the past but her relationship with Haynes was extremely positive.

“Todd is an extremely collaborative person and very generous with his intellect so there was a real meeting of the minds. They are both cineastes and both very sharp and love filmmaking so I think it was an incredibly positive experience for Phyllis. It opened up a whole new world of possibilities for her. When you have someone who reaches your intellectual level as an equal then the process of collaboration can be a wonderful thing,” says Karlsen.

The producers praised Haynes for his meticulous attention to detail and shot list preparation, which also extended to casting every single extra in the film and an impressive look book. Filmed in Cincinnati, the production was at times “excruciating” in terms of the tight film schedule and the producers, understandably, had to face tough conversations with financiers and the bond company.

Asked how they overcame these differences, Vachon replied: “We have been friends for a really really long time and there comes a point when you realise that that is the most important thing. When things get really tough with the bond company and the financiers - and they do – you reach a point where you see past the petty shit and realise how important it is to have this person with you in the trenches - then you can start sorting it out. “

Karlsen added: “Christine is really good and making sure that things are fun, like what’s the worst that can happen? We spent a lot of time talking together in a diner.”

“This project was something that Liz had been protecting and taking care of for so long, for so many years that I wanted to respect that as a co-producer while also being able to examine each other’s decisions,” added Vachon. “Sometimes we disagree because things aren’t going the way we want, but if you are really making the same movie then that all falls by the way side. Partners are the best thing in the world.”

Carol is on cinema release in the UK from November 27