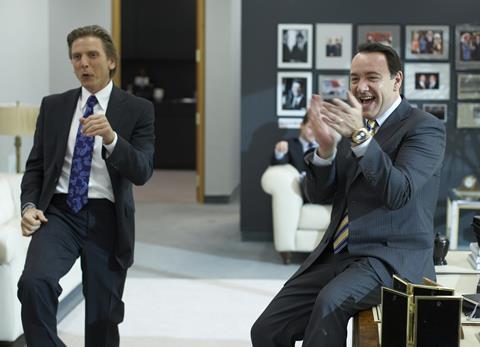 The ripped from the headlines saga of Washington uber lobbyist Jack Abramoff (already the subject of the recent documentary release Casino Jack & the United States of Money) forms the basis for the sprightly, fictionalised Casino Jack that premieres at the Toronto International Film Festival. Grounded by a riveting performance from Kevin Spacey as the disgraced influence peddler, the film is a scattershot approach to recent history that while slightly overblown in approach, maintains the fun of the pursuit of power and lucre throughout.

The film features the final role of Maury Chaykin in a nice turn as a “seen it all” Italian gangster.

No doubt some will find plenty to chew on about American society and politics but director George Hickenlooper and writer Norman Snider wisely steer clear of playing those cards flipped over. The basic facts are culled from actual events but the focus is more personalized; pinpointing the rise and fall of an individual making his American dream come true without fully understanding its meaning or nuance.

The film has good commercial prospects with a quick, savvy U.S. acquisition geared toward securing some late year critical and award recognition. Building upon that it could see some solid niche business in foreign markets.

Opening with his arrest in 2005, Casino Jack adroitly conveys the rapidity his profile transitioned from kingmaker to pariah. The action then reels back two years to considerably better and headier times (the filmmakers have played fast and loose with the real time line; condensing events that occurred as far back as 2001 into a 24 month span).

The script elects to focus on Abramoff’s efforts for Indian casinos as well as the fictionalised SunCruz Casinos (redubbed Sun Sail for the movie). In the process of securing favorable legislation for his clients we get a first hand look at his schmoozing finesse with high ranking officials, particularly Tom DeLay (Spencer Garrett), Republican leader in the U.S. House of Representatives. His demise is largely viewed as the result of getting personally involved with Sun Sail, appointing an erratic shadow rep (Jon Lovitz) and events that led to the murder of the floating casino’s owner.

The line of attack is anything but cut and dried. What anchors the picture is its attention to the personal lives of Abramoff and his partner Michael Scanlon (Barry Pepper), a former aide to DeLay (unmentioned in the film). Though hardly an apologia, Abramoff is filled out by the presence of children, his genuinely warm relationship with his wife (Kelly Preston) and charitable and philanthropic activities. It falls to his wife to remind him that his perspective isn’t necessarily valid and that “we have no friends, only business associates.”

Scanlon, conversely, is a skirt chaser with an obsessive drive for material things. He’s brought down when his girlfriend discovers a pair of someone else’s red panties in the dry cleaning and exacts her revenge with a visit to the FBI.

The key role allows Spacey to deliver a wide-ranging performance that reflects both the character’s intensity and humor. Widely reported as a film geek (he produced a couple of action films in the 1990s), the movie Abramoff goes into some amusing impersonations and in the movie’s one explicitly fantasized moment, shows him attacking members of the Senate Gaming Committee in a variation of Al Pacino’s closing rant from … And Justice for All. The end credits provide an added bonus with a clip of the real Abramoff in a scene that’s recreated in the movie.

The cast is uniformly strong with special kudos to Lovitz as a dissolute loose cannon and Preston as the loving, stabilising force in the title character’s life. The film features the final role of Maury Chaykin in a nice turn as a “seen it all” Italian gangster. Also worth noting is the exemplary work of veteran film editor William Steinkamp who maintains a jaunty pace that goes a long to prevent the myriad plot strands from unraveling.

Casino Jack effects a difficult to pull off sleight-of-hand in its balance of specifics and generalities. One also assumes the behind-the-scenes activities that led to Canadian financing is comparably intriguing. In any case the finished film is an engaging tale of ambition gone awry.