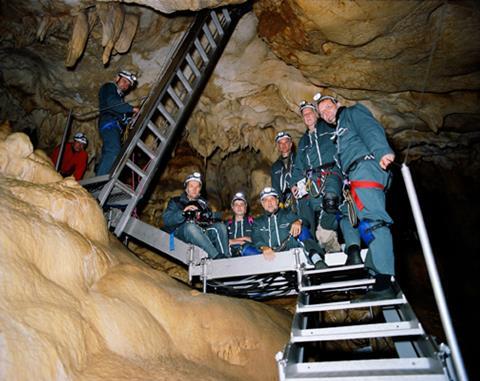 Werner Herzog has spent a lifetime fascinated by extreme individuals, inhospitable landscapes and what constitutes the essence of the human experience. All these concerns are present in Cave Of Forgotten Dreams, a fascinating documentary essay in which Herzog is given unique access to the cave art discovered at Chauvet-Pont-d’Arc in France in 1994.

Herzog’s decision to shoot in 3-D is the film’s greatest asset.

His earnest approach to the sight and significance of the cave art still leaves time to discover some cheerfully eccentric characters and to muse on ” what constitutes humanness”. The result should easily attract Herzog’s loyal audience.

The decision to shoot in 3-D might also attract a wider demographic intrigued by the notion of getting up close and personal with something they would otherwise have no chance of ever seeing. Any documentary channel would consider this a worthwhile addition to their schedules and theatrical prospects should be on a par with Herzog’s Grizzly Man (2005) or Encounters At The End Of The World (2007).

The Chauvet caves contain paintings that are believed to date back some 32,000 years. They were discovered in pristine condition but are so vulnerable that even an accumulation of human breath could start to compromise them. Herzog’s permission to film comes with all manner of restrictions from the size of his crew to the duration of his stay, the fact he must never stray from a walkway or ever touch the art.

His explorations of the cave are interspersed with interviews with archaeologists, paleontologists and experts like master perfumer Maurice Maurin who uses his sense of smell to try and detect whether there may be other undiscovered caves sealed within France’s mountain ranges.

Herzog himself is most excited about what the caves may reveal about human evolution and whether the paintings of elephants, rhinos, carnivores and predators are the first evidence of a human soul being expressed.

Herzog’s decision to shoot in 3-D is the film’s greatest asset. When one expert decides to demonstrate the use of hunting spears they come hurtling from the screen into the lap of the viewer.This is a rare instance of the 3-D appearing gimmicky. Most of the time it enhances the depth of perspective as we glimpse the art and travel through the claustrophobic caves. Crystals sparkle and it feels like being back among the fireflies on Pandora in Avatar as you truly feel you could reach out and touch the stalactites or brush your hand across a painting.

In the production notes Herzog claims his spiritual awakening came by saving up over six months to purchase a book with pictures of a horse from the Lascaux cave. He claims ” The shudder of awe and wonder has never left me.” In the final sections of Caves Of Forgotten Dreams, Herzog simply lets his cameras roam through the caves. A contemporary form of artistic expression captures an ancient form of artistic expression and allows the audience to share Herzog’s sense of awe and wonder. Art lovers, historians and curious general audiences will consider those sequences worth the price of admission.