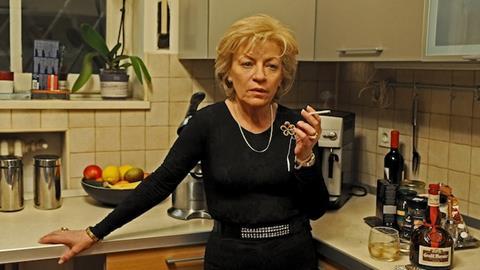 The third feature of Calin Peter Netzer, who previously tackled social ills in his debut Maria about a woman who prostitutes herself to provide for her seven kids, Child’s Pose (Pozitia Copilului) is a technically well-executed but flatly by-the-book and heavy-handed satire on the corruption blighting Romania. It shifts its gaze from the Ceausescu era that’s been the focus of much recent output from the former Soviet nation to a contemporary society equally hostage to the privileged’s sense of entitlement and a police and judiciary more than willing to do their dirty-work.

Both Gheorghiu and Dumitrache put in solid, convincing performances, but are unable to ignite a script which, having set up this corrupt milieu, goes through the motions of the cover-up in a manner all too predictable.

However, it offers nothing we are not already familiar with from its more blackly witty, trail-blazing predecessors of naturalism such as The Death Of Mr Lazarescu, and as such may have a tough time finding an audience beyond the festival circuit.

Cornelia (Luminita Gheorghiu, a regular fixture from other Romanian New Wave films by Cristi Puiu, Cristian Mungiu and Corneliu Poremboiu) is a hard-nosed member of the upper-class who works as an architect and is overbearingly obsessed with her unappreciative son Barbu (Bogdan Dumitrache, another familiar face from recent Romanian output). A friend advises her in the opening scene that if only she’d had two children, she’d be able to choose - the first of many moments designed to show us that everything is negotiable in modern-day Romania, with cynical opportunism the force driving all relations.

With the Secretary of State for Parliamentary Relations (“Public Relations” she tellingly confuses it) among guests at her lavish birthday dinner, we see immediately how well-connected she is, while table conversation hammers home how blase her social set are about fudging the books and negligence (while it’s not doubted a certain doctor was malpracticing, it’s “not like he meant it”, they say).

When Cornelia is pulled out of the theatre to be told the news that Barbu’s hit and killed a child with his Audi, she puts all powers at her disposal in motion to keep him from facing a jail sentence. Storming imperiously into the police station, she accuses the officers of being hyenas threatening her baby, and orders her son to change his statement to efface the fact he was speeding when the accident happened. While the cops are initially reluctant to play along with her demands, after Googling her online they begin to collaborate with covering up his guilt, colluding with influencing the witness and advising her where the victim’s family lives (paying for the funeral being touted as a persuasive sweetener).

From blood-alcohol tests to fixing expert tech analysis of the vehicle, nothing is left to chance in “taking care of” the problem. She nearly meets her match with the witness - an equally well-off, savvy character who drives a hard negotiation, audaciously demanding a fortune in bribe money when they meet in a cafe to settle the matter.

The cover-up is treated as a family affair, with Barbu’s less hands-on father Aurelian (Florin Zamfirescu) and live-in girlfriend Carmen (Ilina Goia) - who Cornelia is seethingly jealous of - also treating it as the natural course of action. As for Barbu, a life of spoilt treatment has left him full of huffy demands (Cornelia’s purchase of the wrong-coloured nose-drops for him prompts a tantrum), with a cowardly desire to avoid dealing with the consequences of the accident (he refuses to meet the witness, or attend the victim’s funeral) in the hope they will fade away.

Soft toys in his childhood bedroom unsubtly drive home the point of the title, that parental pampering has left him unfit to face the realities of adulthood, while unread Herta Muller books on his shelves - a gift from his hypocrite mother - clunkily hammer home his disinterest in anything resembling a social conscience. A chill, barbed meeting between Cornelia and Carmen in which the former tries to control Barbu’s behaviour through another conduit shows that manipulative negotiation is he modus operandi in the personal aspects of this family’s life as well. While the difficult time Barbu is having is repeatedly referred to, the death he’s responsible for and pain he has caused the child’s family are in heavy-handed irony barely acknowledged.

Both Gheorghiu and Dumitrache put in solid, convincing performances, but are unable to ignite a script which, having set up this corrupt milieu, goes through the motions of the cover-up in a manner all too predictable. By the time the visit is made to the modest home of the dead child’s grieving family - “simple people” without underhand means to grease the cogs of such situations - we’ve already got the point many times over, and tension is lost. “You have another child, but I only have him,” Cornelia tells them, referring to a son who considered as an only hope is indeed a sorry sign for the nation.