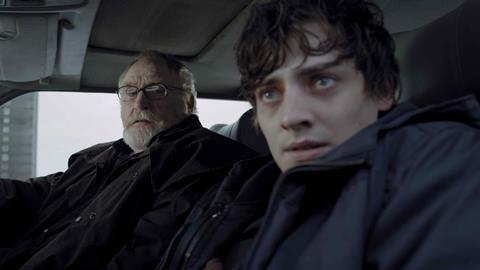 Irish psychological horror tale Citadel suggests that neophyte writer-director Ciaran Foy is a promising new talent in the genre - even if its distinctly low-budget feel and bleak mood suggest strictly limited commercial potential. Hard core horror fans may well take note but scaring up any kind of mainstream audience may be unlikely.

The film’s attempts to make virtues out of the necessities of low budget production sometimes work and sometimes don’t.

After winning the Midnighter Audience Award at SXSW and playing at several European festivals, the film screened this month as part of the BFI London Film Festival. A limited US opening through Cinedigm/New Video follows on November 9.

Set in a wintry urban landscape of decaying tower blocks and dilapidated housing estates, the story begins with young husband Tommy (Aneurin Barnard, from Hunky Dory) watching helplessly as his pregnant wife is attacked by what appears to be a gang of hooded kids.

Left to raise his newborn daughter alone, Tommy struggles with agoraphobia and his fear that the gang will return. However, an embittered priest (James Cosmo, from TV’s Game Of Thrones) leads Tommy to the attackers’ lair and gives him a chance to save himself and his daughter.

Making his feature debut, Foy - whose award winning shorts got him selected for the Dogme-style Advance Party II film-making collective - clearly has more than just shocks on his mind, but the story he’s telling still feels thin. And the uniformly bleak tone begins to wear after a while.

The film’s attempts to make virtues out of the necessities of low budget production sometimes work and sometimes don’t. The tight framing creates a sense of psychological menace and the digital video cinematography by Tim Fleming (Once) adds atmosphere. But the sparsely populated setting (the required tower blocks were actually found in Glasgow, Scotland) and the zombie-like kids are never quite as convincing as they should be.