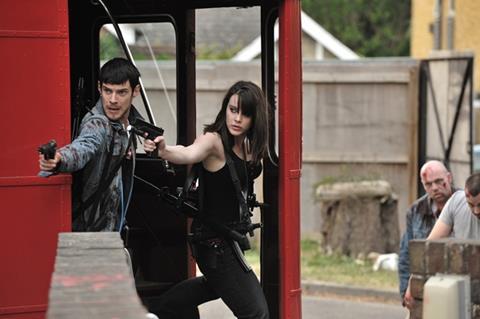 Subtlety may not be the key thing in British horror film Cockneys vs Zombies, but as far as genre mash-ups go – cheeky London cockney types up against the bloodthirsty undead - it pretty much delivers the gory goods.

It is a delight to see Honor Blackman (star of the original The Avengers TV series and Bond girl Pussy Galore in Goldfinger) gun in hand blazing away.

Like any high-concept movie of this variety – from Strippers vs Werewolves to Cowboys & Aliens – the title tends to give away pretty much the entire movie, but at least Cockneys vs Zombies is blessed with enough self-aware humour and some smart cameo performances to set it apart from the usual pack of low-budget British horror fare.

The occasionally smart blend of humour and horror works well (this is no Shaun Of The Dead, but equally pretty enjoyable at times) and the strong cast could well help sales. Genre festival profile will high and sales should follow, though home entertainment may be the most lucrative route for non-English-speaking territories.

It would have been one thing if the film was simply packed with East End types slugging it out with the walking dead, but the film’s clever twist is that much of the zombie attack is on an East End old folks home, leading to gun-toting OAPs (and including solid performers such as Honor Blackman, Dudley Sutton, Tony Gardner and Richard Briers) having to fight off the zombie hordes.

The old folks live at the Bow Bells Care Home, overseen by grumpy 80 year-old granddad Ray Maguire (Alan Ford, a veteran of British crime films). His chancer grandsons Terry and Andy Maguire (Rasmus Hardiker and Harry Treadaway) want to raise money to save the Home, but the only plan they come up with is bank robbery

Teaming up with their cousin Katy Maguire (Michelle Ryan, once of EastEnders on UK television, but who also starred but who also starred in the Bionic Woman remake series) along with gun-wielding headcase Mental Mickey *Ashley ‘Bashy’ Thomas and bumbling no-hoper Davey Tuppance (Jack Doolan).

Though the concept is sound, the film’s script structure doesn’t help the easy flow of the story. It all starts well, but then splits off in two directions – the gang hole up in a warehouse with two hostages as zombies lurk outside, while at the same time the OAPs hide in the home’s kitchen to escape the flesh-munchers – before finally bringing the two strands together. This means that the plot gets rather stilted when it could be having much more fun.

And while Hardiker, Treadaway and Ryan are perfectly fine as the younger cockney types (Ryan is there for some much needed sexiness and a sly sense of humour) who run around and get tooled-up to fight the zombies, the most fun is to be had with the elderly folks as they try and fight back.

Alan Ford is essentially there to shout and swear a lot and be the muscular pensioner at the home, but it is a delight to see Honor Blackman (star of the original The Avengers TV series as Kathy Gale and Bond girl Pussy Galore in Goldfinger) gun in hand blazing away, and even better to see Richard Briers (star of much-loved UK TV series The Good Life) strap an Uzi onto his Zimmer frame and mow down the zombie hordes.

There is a sense that the film gets rather rushed as OAPs and young-uns escape (on a stolen red double-decker bus of course) and head for the relative safety of the River Thames, but while the film is relatively modest in terms of running time it at least delivers enough gags, gore and gun-play to please genre fans.