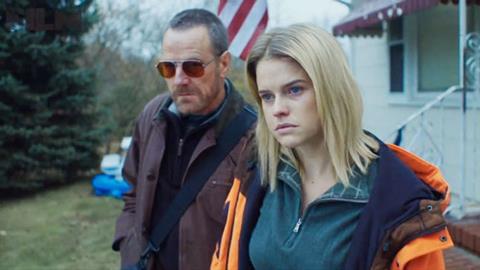 An old-fashioned film-noir crime thriller, the evocatively titled Cold Comes The Night offers up some rather straight-forward crime action, and while perhaps too low key for its own good, it is given heart and energy due to an attractive lead performance by Alice Eve as a struggling motel owner who gets caught up in a deadly criminal conspiracy.

The grim and gloomy motel backdrop has long been a staple of hard-boiled crime fiction, and the bleak wintery backdrop for the film suits the grim and rather dour story well. Cold Comes The Night opens in the UK and Ireland via Sony in mid September, though no other international dates have been confirmed yet.

Alice Eve stars as Chloe, who lives in a rundown motel out on a lonely highway with her young daughter Sophia (Ursula Parker), struggling to make ends meet and being forced to let prostitutes to used the rooms by corrupt cop Billy (Logan Marshall-Green) whose affection for her is unrequited. Social Services are threatening to take her daughter away, and she is desperately saving what little money she can get together.

One night, almost blind Polish criminal Topo (a grizzled and growling Bryan Cranston) checks into the motel. He is traveling with his driver to deliver money to a Canadian gang, but when the driver is killed after an altercation with a prostitute their car – containing a large amount of money he is due to deliver – is impounded by the cops.

Topo takes Chloe and Sophia hostage and forces Chloe to be his eyes and his driver, setting out after Billy who they work out has found the money. Chloe decides to try and use the situation to her advantage, and offers Topo a deal – she helps get the money and he splits the cash so she can start a new life. But soon Chloe is part of something over her head, and as the bodies start falling after a series of double-crosses she has to try and find a way to survive.

Tze Chun, whose acclaimed debut film Children Of Invention premiered at Sundance in 2009, has crafted a nicely tense low-key crime tale that, while engagingly made and nicely performed, feels all too familiar and lacking the twists and a dark sense of humour such would-be hard-boiled crime tales need. Alice Eve sports a fine American accent and work well with the always-reliable Bryan Cranston, who keeps a grim, straight, face throughout the proceedings, though gets lost a little behind his thick Polish accent.