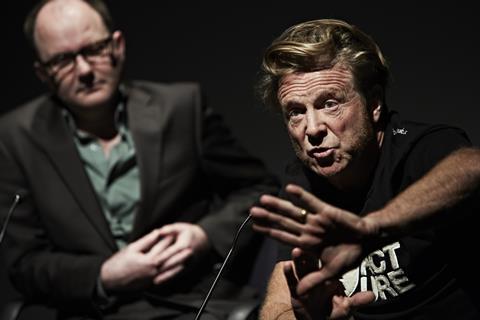 Bookended by extracts from Ron Howard’s BAFTA nominated Rush, Dod Mantle spoke with journalist Ian Haydn Smith as part of the BAFTA Masterclass series about his career and the importance of challenging himself.

Although initially trained as a photographer, film offered the chance to be “driven forward and encouraged by people who had something in common with me. Ever since then I’ve found that I attract people with the same motivation and my working relationships develop from there.”

That common element has seen Dod Mantle repeatedly work with Danny Boyle, Lars von Trier, Kevin Macdonald and now Howard, who he worked again with on the director’s upcoming Heart of the Sea (2015).

His earliest cinematic partnership was with Thomas Vinterberg, first on The Biggest Heroes (1998) and then the groundbreaking Festen (1998), the first film made under the aegis of the Dogme 95 Manifesto. It was a key moment in his career development.

“Those rules,” he says, “made us think a little bit more about how we made films. As professionals we run the risk of falling into autopilot after only a few films so this allowed us to think differently. Thomas, unlike Lars [von Trier], obeyed the rules and spent most of his time with the actors. That left me alone with the visuals, which was nerve-wracking but an incredible privilege.”

His work on Festen made Dod Mantle a much sought after DoP. He described how Danny Boyle saw in his style the chance to re-define the horror genre with 28 Days Later (2002).  Employing miniDV cameras, they exploded the zombie film: “Danny came from his collaboration with the brilliant Darius Khondji on The Beach (2000) and contacted me because he was fascinated by the way the camera moved in Festen. But that was a small film and 28 Days Later was huge.

He wanted to close London down and I was crapping myself because we had chosen to film on these consumer cameras. But he was attracted to how I could operate them and the element of liberation in using so many. The shutter system I employed with these cameras, which is hard to achieve with film, allowed me to create this sense of fear from a city overrun by zombies.”

It is a stark contrast to the pared-down aesthetic of Dod Mantle’s first collaboration with Lars von Trier on Dogville (2003): “If 28 Days Later was all about energy, what Lars was looking for was a film about faces, actors and performance. I see so many films where the mise en scene might as well fall away because it hasn’t been thought through well enough. In that way Dogville is honest.

“Where Lars interests me most is in challenging us. He wanted naked performance that would then be cut as he saw fit. There were also these incredible aerial shots, filming into a close-up from a very wide angle, which were immensely difficult to achieve.

“Every film I’ve made with Lars involves a concise idea. At script stage it can seem simple enough, but when you start filming it becomes incredibly complex. He enjoys seeing people he works with being taken to the precipice. He knows everything about the technical elements of film and loves watching us hard at it.”

Capturing the nuances of human emotion lay at the heart of The Last King of Scotland (2006), Dod Mantle’s first film with Kevin Macdonald. Their challenge was to take the audience into the heart of Idi Amin’s regime: “The story is diabolical. I had this idea with my lighting guys and Kevin about moving the light from a slightly more affectionate angle across the face to bringing it round high and oppressive as the film progresses.

“There’s a scene where we see the victims and then enter Amin’s lair. James McAvoy’s character is journeying down, like Dante. As he does, the camera also moves lower and the lights are so high there is nothing but darkness in the eyes of the characters. That worked well with such a horrific story.”

Technology and high emotion is key to Rush: “Some people are saying this is an action film but for me this is an emotional drama. I just had to find a way to deal with these fast moving cars. It’s the same as working with children moving quickly in Slumdog Millionaire (2008). I just need to find an aesthetic palette that works. Most of the time it’s instinctive.”

But core to everything Dod Mantle has worked on is emotion: “All I really care about is emotions. That’s why I work on films – to find ways to convey to audiences an emotion.”