Comment: The film industry needs to pull together if it is to survive this pandemic 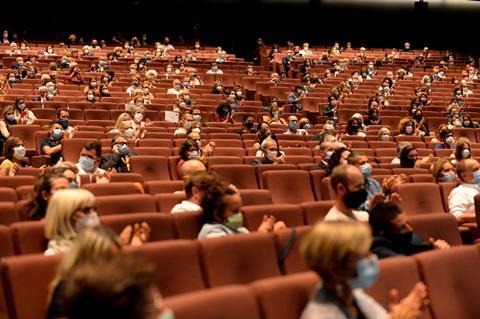 In a year of so many sudden and disorientating changes, September was a marker. And October has already come in hot.

The film industry barely had time to celebrate a victory for Venice and the fact that San Sebastian managed to pull off a physical festival in a Covid-19 hotspot when Bond postponed and long-festering fissures in the exhibition sector cracked open.

They may be at opposite ends of the sector, but these stories are tied. A buying blitz by the streamers at the festivals and the hesitancy on the part of the studios means exhibition is caught in a pincer. The industry must face up to this: there’s only so long before a hold pattern becomes a way of life.

Cineworld’s decision to shutter its US and UK sites has come on the heels of the postponement of No Time To Die to April 2021, but, let’s face it, Bond was hanging on by its nails to the cliff face that has become global day-and-date releasing. (It’s worth noting, though, that on the same three-day holiday weekend, China saw $215m for local releases, which is more or less equal to Tenet’s international gross, the figure which reportedly prompted Universal’s Bond holdback.)

There are lessons to be learned here, of course, but the biggest takeaway is that the industry isn’t pulling together. It’s tempting to see “Hollywood” as a block, but studios aren’t even working together, focusing on individual tentpoles as opposed to seeing a bigger picture.

Exhibition, so reliant on the studio pipeline of late, is out on a limb while it waits. Independent sites are squeezed further, yet there’s an inflexibility in parts of that sector – on theatrical windows, on inter-circuit rivalry – which is beginning to sound like Nero’s fiddle in the middle of a pandemic.

Over in festival-land, the streamers snapped up independent features the second the good reviews started to drop in. Yet some cinemas won’t work with streamers and Netflix, for example, has decided not to work with festivals at all this year. Instead, it opted to drop at least two high-profile films during September that could have helped out a struggling sector, which has proved it doesn’t absolutely need the physical participation of talent as claimed (see Nomadland).

If seems we’re at that point in the film where everybody realises they have to pull together, or it won’t end well.

Sector by sector, valiant efforts have been made to keep the industry, so disproportionately damaged by the pandemic, afloat. Production has had to overhaul itself. The sales sector has had to go online. Festivals have also made herculean efforts to keep the show on the road, achieving the seemingly impossible – Venice – by snatching victory out of a dismal time. Not just for the astonishing organisation of a large event in a pandemic, but for the cinema on display: without the benefit of any major studio or streaming service participation, Venice was almost uniformly good, with a few exceptions that feel petty to note here.

Streamers, facing into a supply shortage next year, were quick to pounce. Talk of awards started to bounce around (although it will be a challenge for Hollywood to build a corridor while cinemas are shuttered: the rules have been rewritten, but closed sites and unemployed staffers play a sad backing track on a red carpet).

At the very end of the food chain, the exhibition sector watches and waits, until it can’t anymore.

It’s clear – but always worth restating the obvious – that every step on this ladder is connected. Studios jostling for position for their tentpoles and dreaming of global releasing grosses of last year play in the same theatres, to the same audiences. The unhelpful stand-off between streamers and exhibition can become fatal in the world of Covid-19 unless it’s addressed. Independent cinemas squabbling with each other over exclusivity need to realise it’s never a win if the theatre is empty.

The festival sector can’t function without product and venues in which to to show it. Streamers work on a shop-window basis, and you can’t improve on festivals/exhibition for that. At a very fundamental level, BFI London Film Festival was attempting to show some of its few physical premieres in cinemas that will now be shut.

There’s some terrible news out there at the moment for people employed in the sector. Yet there are also some positive takeaways. Festivals, and independent filmmaking, have made a tentative, encouraging comeback.

Films are being shot. We now know that a physical festival is possible, and the ticketing system devised by Venice and San Sebastian is a genius move. Despite intermittent squabbling, particularly over premiere status, which raged on throughout September, festival heads managed to show a united front to an industry looking for reassurance. (And that’s more than a couple of giant egos which squashed onto the same stage on Venice’s opening night). You wonder if the maxim about recessions will play out here: the big get bigger, the small go niche, but the centre has trouble holding.

Venice took place on the Lido, an island, and closed entry to the festival site, carrying out both temperature controls and security measures with a professional ease. San Sebastian took place in a town in the Basque Country, an area with soaring levels of Covid-19, with both public and professionals in attendance at screenings. Cinemas, after all, are controlled environments.

Inside the theatre at both festivals, ushers were active: social distancing and face masks were mandatory. Woe betide anyone who wasn’t fully masked throughout: expulsion and a public dressing-down awaited (as French director Eugene Green will attest, after his departure from San Sebastian). Losses were made in ticketing revenues, certainly, but cinemas were full (or, half-full, with protocols). There were moments of genuine cinematic excitement and discovery.

Both of those European festivals count on generous state subsidies alongside commercial partnerships, while Toronto is less lucky. When municipal budgets are redrawn next year in the light of global events, the field may look more level.

October has started badly. Cineworld’s closure is a body blow. The festival sector is learning to walk again – New York and Zurich film festivals have come to a close, and the Asian festival season is about to start, mostly online. We know that physical events can and should be staged, where possible, using protocols. There’s nothing like a film festival, especially one with a high curatorial standard, to generate interest, buzz and simple, essential confidence in the industry, while the blended model is working well for industry events. You can go to the cinema in a pandemic and be safe.

But San Sebastian was besieged by storms and that seemed apt for the business as a whole. Chasms have broken open, business models have collided openly. It’s been every sector for itself. Simply opening an umbrella and hoping for the best won’t make this tempest go away.