Corin Hardy has discussed the journey and film-making craft behind his debut The Hallow with NFTS students. 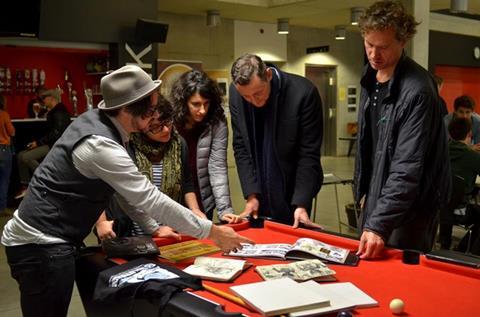 Hardy’s passion for craftsmanship shines through his acclaimed work. Screen’s review said: “Demonstrating a facility with storytelling almost as skilful as his nimble orchestration of animatronics and visual effects, this pleasingly old-school Irish-backwoods scarer should appeal to fans of Guillermo Del Toro, while setting the filmmaker along a similar Hollywood-bound path”.

In conversation with leading UK commercials director Dougal Wilson, Hardy talked to NFTS students about creating the film.  “I like to try and push myself to aspire to something that shouldn’t be possible on the time and the budget”, he said.

To achieve the sense of realism he wanted for the film, Hardy described how he worked with animatronics and prosthetics to capture as much as possible of the monsters and effects practically in camera, as well as working with VFX.

“Practical effects have always been a big love,” said Hardy, who began creating his own practical effects in his bikeshed aged 12 and bonded with fellow British director Edgar Wright over a shared love of Evil Dead II, when they met aged 14 at a Young Person’s Film Competition. Hardy’s entry was his first experiment with genre-blending stop motion - a chainsaw wielding Morph.

For The Hallow, Hardy said he wanted to try and create a new monster, and drew on his childhood love of European fairytales and the creepy illustrations in some of the books.

“I didn’t want it to be a gothic, supernatural movie that was too otherworldly, much as I love those, but to ask of fairytales and folklore ‘what could this be based on if it were real?’”, he told students. “I wanted that marriage of taking mythology into reality.”

Hardy was full of praise for all his actors in achieving the “emotional undercurrent” he wanted for the film.  The film stars BAFTA nominated Joseph Mawle, soon to appear in Ron Howard’s In The Heart of the Sea.

“He’s an incredible actor with a powerful capability of expressing emotion, even when he’s not saying much, it’s all in his eyes,” said Hardy.

The director shared his private sketchbooks with NFTS students, revealing early drawings for the film and how he storyboards.

Hardy has been lined-up to direct the reboot of dark graphic novel adaptation The Crow, set to go into production in 2016.

He revealed to students that he had loved The Crow since he was a teenager, dressed up as the character when he was 17 and was thrilled to be making the film.

Find out more about the NFTS and its courses here https://nfts.co.uk/our-courses