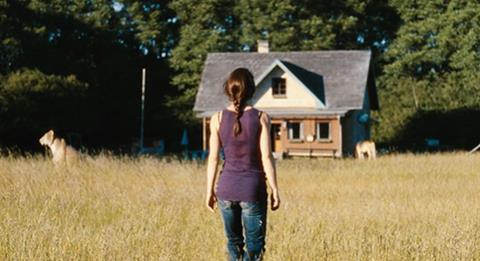 Based on a 1914 stage play by Karl Schoenherr called She Devil, Florian Flicker’s first film in 12 years offers an interesting concept, nice performances by its trio of lead actors and some visually enticing landscapes shot by Austria’s prime cinematographer, Martin Gschlacht, but an insufficiently developed script never manages to quite fill up its 90 minutes running time. World premiered in Sarajevo, its minimalist romantic triangle affair may find a small audience, particularly in Central Europe, before reaching its natural destination on television.

Flicker doesn’t quite offer a solid realistic basis for his plot.

Brought forward from early 20th century to 2001, at a time when East Europeans were eagerly seeking ways and means of breaking into the West, Crossing Boundaries(Grenzganger) takes place on the Eastern border of Austria separating it from Slovakia.

Hans (Andreas Lust) and Jana (Andrea Wenzl), a Slovak by birth, live in a remote house by the river and operate a coffee house and bar on the ground floor. Hans, a third-generation fisherman, dreams of putting up a real guest house on the premises, possibly with a golf course attached to it, and hopes his smuggling of illegal refugees across the river will provide the money he needs for his project. Jana tacitly encourages and assists him, probably out of her empathy for the refugees she wants to help more than anything else.

The third party of this classic triangle is Ronny (Stefan Pohl), a young soldier sent from Vienna to man one of the observation posts on the border and prevent any illegal attempt to cross from one side to the other.

Hans would like Jana to keep Ronny busy as he goes about his smuggling business, while Ronny’s commander suggests he should court Jana to help catch her partner red-handed, while Jana would like some real affection and consideration, instead of being treated by both men as an exploitable object, useful for Hans to confuse the law, and for Ronny as a sex diversion far away from his beloved Vienna. Though neither Jana nor Ronny are at first very enthusiastic about playing along, they both give in without any visible resistance, entering the kind of game that couldn’t possibly have a happy ending.

The encounter between these three characters offers plenty of intricate and sophisticated options, but Flicker’s script fails to put some real meat on its skeletal structure, limiting himself to suggestions, hints and innuendoes, keeping all the relations under a layer of long silences, significant looks and shorthand dialogues, all of them intended to disguise the real drama that never quite bursts out into the open, with the exception of a single scene on the river when Hans gives vent to the jealousy building up inside him.

Proceeding at a slow, unhurried pace, relying on lavish images of nature at its best and in its best season and throwing in a few sarcastic allusions at the Austrian Army and the conduct of its officers, Flicker doesn’t quite offer a solid realistic basis for his plot – operating a bar in the middle of nowhere looks like a particularly strange notion – with the three characters never allowed to display anything even slightly akin to affection for each other. It is more a question of lust, on the one hand and greed on the other, which activates them.

All of which hinders the three lead actors from offering fully fledged, three dimensional characters. Each one of them looks intriguing and worth knowing better, in particular Lust and Wenzl, but had they been kept busier, instead of inviting them to indulge in so many meaningful silences, it would have helped everybody around.

Screenplay: Florian Flicker based in play by Karl Schoenherr