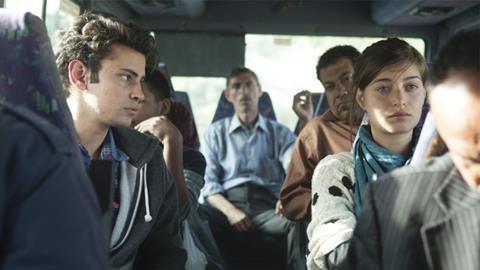 Eran Riklis’ best film in a while, Dancing Arabs (Aravim Rokdim) was originally programmed to open the Jerusalem Film Festival but because of its provocative title, unfit in the present political circumstances, it was deemed wiser to move the screening to a less spectacular slot and most probably delay its release on the domestic market for the time being. However, once unveiled on Locarno’s Piazza Grande next month, the adaptation of Sayed Kashua’s semi-autobiographic novel is bound to encounter as enthusiastic a reception as Riklis had there some years ago with The Syrian Bride.

Though the fusion between Kashua, a highly respected Israeli Arab journalist and columnist, whose prickly humor often rubs both Israeli and Arabs the wrong way, and Riklis’ more sedate touch, leads sometimes to contradictory results, the film points out in no uncertain manner many painful aspects of the co-existence between the large Arab minority in Israel and the Jewish state.

The title, taken from the expression “dancing at two weddings”, refers to the dilemma of a population that has to live with both its Arab identity and Israeli nationality and the countless conflicts resulting from this double allegiance.

The story of Eyad Barhum (Tawfeek Barhum) resembles that of Kashua himself. Born and bred in an Arab village, his father Tira (Ali Suleiman) was put in prison by the Israeli security forces under suspicion of having assisted an act of terrorism, and while never judged or condemned his academic studies in Jerusalem were cut short and he had to return to his village.

Biding his time at home, avidly following the news on the Arab television channels like all his neighbors, and hoping against hope that every new eruption of violence in the area will finally bring down the “Zionist empire”, he nevertheless realises that education is the only way to progress. And when his shy, introvert, but very smart son obtains a scholarship to the most prestigious Israeli high school in Jerusalem, he sends him there without a moment’s hesitation.

Eyad’s integration in a boarding school where he is the first and only Arab student, follows familiar patterns, whether it refers to his Arab articulation (all P’s become B’s)’ the difficulty of his school mates and teachers to pronounce his name correctly, or to his handling of a fork and knife. But despite all the impediments, he is a first rate student With the help of a classmate, Naomi (Danielle Kitzis) he gets rid of his Arab accent, while another classmate, Jonathan (Michael Moshonov), suffering from muscular dystrophy and chained to his wheelchair, helps him overcome most of his sensitive hang-ups.

Predictably enough, the relationship with Naomi blossoms into an affair that proves to be utterly unacceptable not only to her parents but to his own as well. At the same time, Jonathan’s physical condition deteriorates and his mother, Edna (Yael Abekassis) appeals to Eyad for help to take care of her son, who is in need of constant and intensive care.

Constant reminders of political strife, military actions, tense relations between Jews and Arabs who may look alike but do not act as such, are seamlessly inserted into the narrative, coming through in TV newscasts, street checks, road blocks, an unpleasantly ugly encounter with a gang of boorish hoodlums, or even through an unexpected interpretation of canonic Hebrew literature and its undercurrent of racial slants.

Riklis’ entire cast, particularly Ali Suleiman and Yael Abekassis in supporting roles, offer sympathetic performances, while the efficient assistance of Richard Marizy’s editing lends the first part of the film an economic precision and purposefulness before reaching the disturbing final scene. Riklis gradually mellows and relaxes as the plot starts to focus on the love story and on Jonathan’s state of health, including a reference to The Diving Bell And The Butterfly, into the softer, more sentimental register that he seems to prefer.