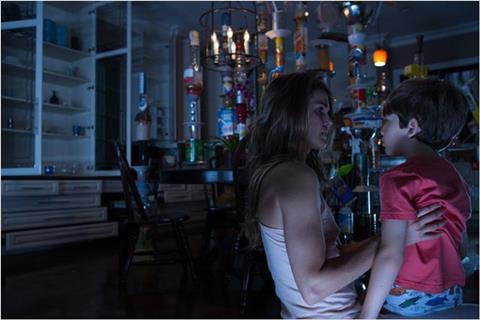 A nagging sense of missed opportunity somewhat weighs down Dark Skies, an intermittently intriguing and fairly restrained chiller that fails to fully flesh out some of its more interesting and distinguishing narrative elements. Relying less on CGI spectacle than his previous genre efforts, Legion and Priest, director Scott Stewart’s generally well orchestrated supernatural mood piece details a suburban family who find themselves under peril of unfriendly alien visitation.

It’s J.K. Simmons, though, as the requisite hermetic alien expert, who steals Dark Skies with an evocative yet non-showy turn.

Released this weekend in the United States without benefit of advance screenings for critics, the PG-13-rated Dark Skies may have trouble touching the upper limits of the nine-figure worldwide grosses for Paranormal Activity, Insidious and Sinister, with whom the movie shares producer Jason Blum. Nevertheless, with the easy translation of its premise, Dark Skies should deliver a handsome return-on-investment, with strong ancillary value and readymade franchise opportunity.

The oldest son of Los Angeles suburbanites Daniel and Lacy Barrett (Josh Hamilton and Keri Russell), Jesse (Dakota Goyo), is on the cusp of teenagedom, navigating the choppy waters of his first crush with an older friend (LJ Benet) who’s not a particularly good influence. Meanwhile, the Barretts’ youngest son, Sammy (Kadan Rockett), is disturbed by dreams in which he’s visited by a mysterious “Sandman.” When a series of increasingly disturbing events and seemingly inexplicable security alarm breaches disrupt their settled domesticity, the Barretts slowly, reluctantly come to believe they’re the target of an unimaginably terrifying and deadly extraterrestrial force.

As their children become physically marked and act out in unusual ways, Dark Skies toys with the notion of exploring Daniel and Lucy as villains in the public consciousness, in the eyes of suspicious neighbors. But Stewart, who co-founded the well regarded visual effects company The Orphanage, is not as adept at crafting compelling shorthand story beats as he is in generally peddling mood, and the movie ultimately abandons the full weight of this judgment.

Both the relatively artificial compression of time and an unenforced threat of outside consequence, in the form of child protective services, take down a peg or two a solid narrative premise which could much more interestingly explore ideas of realized, us-versus-the-world paranoia. The film’s self-satisfied nominal end twist, too, is telegraphed long before the conclusion, rendering unnecessary and silly a series of interstitial flashback edits.

Technically, Dark Skies aims more for unnerving tension than jump-scare rib-nudging, which Stewart and cinematographer David Boyd achieve via a motley spring mix of high and low-angle shots, as well as a nice mixture of eerie, character-rooted incidents that haven’t been overused within the supernatural horror genre. Composer Joseph Bishara’s droning, sometimes dissonant score also abets this tack, creating as it does an aural fog of dread.

While Goyo is solid, and Russell and Hamilton each deliver credibly worried and fretful performances, young Rockett’s turn is more problematic, leaning as it does on forced, alternately plaintive and spooky sing-song warbling.

It’s J.K. Simmons, though, as the requisite hermetic alien expert, who steals Dark Skies with an evocative yet non-showy turn. While the movie’s ending sets things up neatly for a sequel with the Barretts should market forces favor it, it’s the story of Simmons’ haunted character that offers richer possibilities.