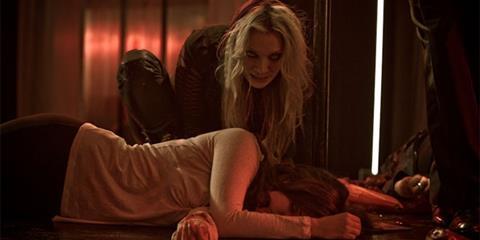 Those great British cinema staples – the crime and horror genres – come together to pretty good effect in Dead Cert, a nicely staged (if still rather by-the-numbers) gore number than puts vampires up against London villains….and those vampires don’t stand a chance.

Clearly the filmmakers have viewed movies like Robert Rodriguez’s From Dusk Till Dawn before, and make a pretty impressive stab at blending horror and gangster thrills.

The film, directed by Steven Lawson, had its premiere at London’s FrightFest prior to a quick transition to DVD – bypassing UK theatrical – where it will most likely find a welcoming audience.  Likely to also feature at genre festivals around the world.

Dead Cert opens fair-and-square in Guy Ritchie territory, with a bit of bare-knuckle fighting and mobster wheeler-dealing. It seems that former hardman Freddie ‘Dead Cert’ Frankham (a nice performance by Craig Fairbrass) is aiming to go legit…which in his world means opening a mildly sleazy nightclub.

But – as a slightly crazed geezer named Kenneth Mason (Steven Berkoff, engagingly overacting) handily points out – it seems the club is built on the site an ancient 17th century Black Church established by a Romanian vampire chief named The Wolf, and his followers want their base back.

If the first half of the film is well-and-truly in Brit gangster territory, then the second is definitely into horror mode, and Freddie and his gangster pals (well, the ones who haven’t been killed already) have to launch an attack on the vampire hordes. From here on in the blood flows freely.

Clearly the filmmakers have viewed movies like Robert Rodriguez’s From Dusk Till Dawn before, and make a pretty impressive stab at blending horror and gangster thrills. In truth the pacing in the first part is little laboured and the film only gathers the appropriate momentum in the final section. For no particular reason at all Brit crime film regular Danny Dyer crops up for a tiny cameo at the end of the film.

Screenplay: Ben Shillito, based on a story by Steven Lawson, Nick Onsloe and Jonathan Sothcott