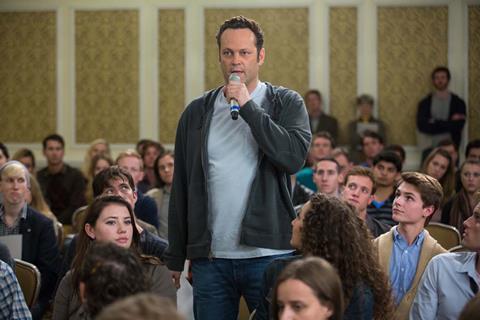 Vince Vaughn helps provide the Hollywood sheen in Delivery Man, writer-director Ken Scott’s sweet but patchy US remake of his own hit French-Canadian comedy Starbuck. The feel-good tone could be a tricky sell to fans of Vaughn’s edgier outings but it, and the story’s non-conventional family theme, might work for a slightly more mainstream audience looking for holiday season diversion.

Disney’s Touchstone label opens the DreamWorks production in the US on Nov 22 - a few days before the Thanksgiving holiday weekend - and will be hoping for a better start than those achieved by recent Vaughn under-performers like The Internship and The Watch. International openings - through Disney or Mister Smith Entertainment and its local partners - follow before or after Christmas.

Taking over the role filled in the original by Quebecois multi-hyphenate Patrick Huard, Vaughn plays David Wozniak, an affable 42-year-old underachiever who finds out that his youthful sperm donations have made him father to 533 children. When a group of the now-grown kids file a suit to make him reveal his identity, David has to face up to his past and consider his future with girlfriend Emma (Cobie Smulders, from The Avengers).

In his English-language debut, Scott lets the remake follow the original almost scene-for-scene and line-for-line but gives the US version a lighter feel and a brighter look. The comedy is allowed to remain fairly subtle but in this version the story’s darker moments - one of David’s offspring turns out to be a heroin user and another is disabled - sometimes seem awkward..

Adopting a kinder, gentler screen persona than usual, Vaughn brings his familiar slacker charm to the proceedings and he has some fun scenes with Chris Pratt (from Moneyball) as David’s best friend and amateurish lawyer.