Overture Films has emerged as one of the main ports of call for independent films looking for US distribution. Key executives Chris McGurk, Danny Rosett and Peter Adee talk to Mike Goodridge about their coming of age 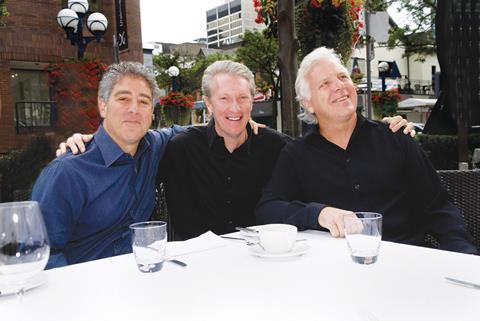 With four films going out wide in the US between September 25 and November 6, and another one (Breck Eisner’s The Crazies) in January 2010, Overture Films is in the middle of a ‘coming out’ party of sorts. After two-and-a-half years of building its brand, infrastructure and product line, the domestic distributor has found itself powerfully positioned as one of the only well-capitalised non-studio distributors in the marketplace - a situation which has been enhanced by the fast fadeout of studio-specialised labels of late, not to mention the contraction or demise of other independents.

Backed by John Malone’s Liberty Media Corp and created and run by former MGM chief executive Chris McGurk and former UA chief Danny Rosett, Overture was officially launched in November 2006, although McGurk had been working on creating a theatrical distribution arm for Liberty since mid-2006.

The original forte of Overture was that it immediately had access to US TV and home-video deals through Liberty’s Starz pay-TV channels and Anchor Bay’s home-video distribution unit respectively.

“We wanted to put all the building blocks in distribution in place before we executed our production plan.”

“The idea was to take advantage of Liberty’s position in the marketplace controlling a bouquet of media assets, but importantly a pay-TV service, and leverage their way through Anchor Bay and Overture into a fully integrated distribution company,” explained COO Rosett recently at the Toronto International Film Festival, where two new Overture titles, Capitalism: A Love Story and The Men Who Stare At Goats, received a warm reception. “Capturing distribution profits was the key.”

“The idea was always that when we set about building our mini-major, we wanted to put all the building blocks in distribution in place before we executed our production plan,” elaborates McGurk, who is CEO of both Overture and Anchor Bay. “We knew that video and pay-TV are the most difficult elements of distribution, so Liberty gave us those two quality options in one fell swoop.”

Theatrical distribution, McGurk says, is actually the easiest of the three to put together “because it’s all about hiring the right people and so we hired Peter Adee”. Adee, a veteran of the studio system at Universal, DreamWorks and, under McGurk, at MGM, joined Overture as president of worldwide marketing and distribution in early 2007 and set about building a theatrical infrastructure.

From the start, the product mix was designed as a blend of highly targeted specialised films and broad commercial movies that could play on 3,000 screens -but McGurk had sold Malone on a financially responsible business plan and had no intention of getting involved in the tentpole business that is a trademark of the major studios. Indeed, Malone had famously avoided the film content production business until now, being fully aware of how dangerous and cost intensive it could be.

“You never know where the hits are going to come from, but you have to make sure the wipeouts are going to be considerably less than everybody else’s wipeouts.”

“Our acquisition and production model made a lot of sense to them,” says McGurk. “It was a portfolio approach focused on movies budgeted at under $25m. I think when we laid that out in painstaking detail to them, it probably seemed like a more rational business plan right for the times than some of the other plans they have looked at over the last 35 years.”

The plan, explains McGurk, made conservative estimates that even if no movie ever made more than $45m at the domestic box office, the company would still be profitable. “Obviously you want movies to do that business, but a key element of the plan was that we didn’t need to make $75m or $100m to make the economics work, even though that was what we were shooting for on the up side.”

“Plus we can’t get killed on any one movie,” adds Rosett. “You never know where the hits are going to come from, but you have to make sure the wipeouts are going to be considerably less than everybody else’s wipeouts. The way to do that is mostly from engineering how to get your p&a back quickly.”

“Our production costs are low, so when we spend money we get our money back quicker than pretty much anybody,” adds Adee.

So far, Overture’s biggest-performing film is Righteous Kill, starring Al Pacino and Robert De Niro, which took $40.1m in September 2008 and, affirms Adee, “was very profitable for us”.

Overture also highlighted its specialised distribution capabilities with two festival acquisitions - The Visitor from Toronto 2007 and Sunshine Cleaning from Sundance 2008, which took $9.4m and $12.1m respectively when they were released.

“Those films have done more to demonstrate to the agencies, film-makers and exhibitors that we have the skills,” says Rosett. “It’s great to be well capitalised, but what people really want to see is that you’ve got the right people and the machinery to take the hard movies and make them work.”

Since Overture started, the company has also benefited from a shift in the marketplace, which has given it access to a range of unexpectedly high-profile product. “Two years ago, movies would have been packaged off foreign presales without a domestic,” says Rosett. “Everything is upside down now. Nobody wants to take that risk any more. It used to be that they would hold back domestic and that would be their up side.

“What people really want to see is that you’ve got the right people and the machinery to take the hard movies and make them work.”

“We started to discover that we were able to get the domestic rights for higher-budget movies for a relatively smaller percentage of the budget than you would have thought,” he continues. “Fast forward to now and we have much better leverage because domestic distribution is so much more important as foreign presales aren’t there any more. Righteous Kill was the first of a series of opportunities for us.” McGurk explains that Overture managed to buy domestic rights for Constantin’s $35m-$40m Pandorum for less than $10m, and that on The Film Department’s $53m thriller Law Abiding Citizen “we are in for p&a only.There is no production investment on our part in that film at all. We are last in and first out.”

The p&a model can often be a dangerous one for independent producers who essentially rent a system and then find the distributor less than invested in doing a good job. But McGurk stresses that on Law Abiding Citizen, “we are not renting our system out. We are an end-user and part of the reason we were formed is to provide quality commercial movies for the Starz channels and Anchor Bay. We are not in it for fees, we are in it to anchor movies for these distribution channels and we have long-term rights.”

But capitalising on the shortage of US theatrical distribution outlets could see Overture increase its activities on the distribution side and bring p&a financing to the table for the glut of films out there. “It’s a great way to feed the machine and get involved in higher-profile movies,” says Rosett. “We’re seeing so many opportunities. Not only are we getting involved in films for a lower percentage of the budget, but on the p&a deals we are getting a much bigger share of the backend than you would traditionally get because that’s the leverage you have.”

“The idea was to start a new label and vacuum up a lot of the product that is going unbought at the moment, because there is less money around and the majors aren’t acquiring films like they used to because they don’t want to put up the p&a commitment,” says McGurk. “Anchor Bay Films will do as many as eight to 10 pictures a year, release them on a micro level on fewer than 100 screens through their own distribution operation to set up a strong video release. They have a separate deal with Starz. So between the Anchor Bay films and the Overture films, Anchor Bay will have as many as 20 releases a year to fill their pipeline.” Anchor Bay, which falls under McGurk’s auspices, had doubled the size of its year-on-year revenues in 2008, he says. Pick-ups through Anchor Bay Films include Spread, starring Ashton Kutcher, Raymond De Felitta’s City Island and The Open Road with Jeff Bridges and Justin Timberlake.

“The idea was to start a new label and vacuum up a lot of the product that is going unbought at the moment.”

“Starz has 16 channels in the US,” adds Rosett. “That’s 24/7 programming and this is a very cost-effective way to acquire a lot of star-driven programming.” Meanwhile, Overture is re-evaluating its international sales strategy once its deal with Paramount Vantage comes to an end after The Crazies. “We want to be as flexible as possible from now on,” says Rosett. “We want to have a system that is an open architecture, if you will. So that however people’s financing is put together, we’re able to accommodate that without having an exclusive relationship with one company. We’re focused on domestic distribution after all.”

Overture now employs 73 staff, and Anchor Bay a further 100 people - a size which McGurk says is “small and effective”. Sean Furst, who originally co-headed the production and acquisitions department at Overture with Robert Kessel, has now segued into a first-look deal with his brother Bryan, while Kessel is now in charge.

Meanwhile, many of the projects that have been in development for the last two years are now coming to fruition, and 2010 will see releases including Matt Reeves’ Let Me In (a remake of Swedish vampire hit Let The Right One In), and Philip Seymour Hoffman’s directorial debut Jack Goes Boating. Early next year, Overture will also release Antoine Fuqua’s Brooklyn’s Finest, which was picked up when original buyer Senator US went out of business.

Currently in development are a number of new titles, including a Louisiana-set remake of the Icelandic thriller Jar City, with Tod ‘Kip’ Williams directing and the Furst brothers producing, a Bill Mechanic-produced remake of Hong Kong comedy smash Love Undercover, and Celeste And Jesse Forever, which was co-written by and will star US TV comedy star Rashida Jones.

With the contracted theatrical market now working heavily in Overture’s favour, John Malone must certainly be optimistic about his investment in the venture. “We have got something that everybody wants, which is fully integrated domestic distribution and a track record of successfully releasing both bigger and smaller films,” says McGurk. “So regardless of what the corporate plan is down the road, we have an asset that’s going to have value.”