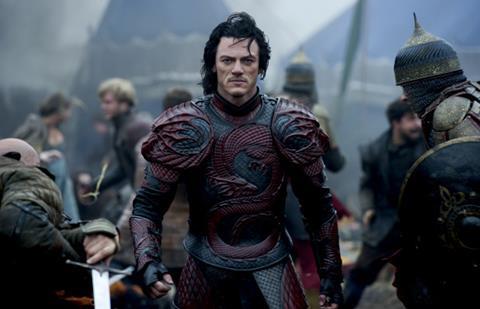 Though the title suggests that director Gary Shore and screenwriters Matt Sazama and Burk Sharpless are convinced they’ve hit on a new angle, this feels like a feature-length expansion of the prologue of Francis Ford Coppola’s Bram Stoker’s Dracula.

A promising development is his raising an army of murdered servants as vampires for a final battle with Mehmed, but this fizzles out with the first light of dawn and a muddy finish.

The story sets out to bridge the gap between Vlad the Impaler, a historical 15th Century prince who defended Wallachia against the Turks, and Count Dracula, the vampire villain of Bram Stoker’s 1897 novel Dracula (and hundreds of film, TV, stage, prose and comics derivatives).

In truth, Stoker only intended a vague link between his Count Dracula and the historical Vlad Dracula, but a whole industry - including the Romanian tourist business - has sprung out of the connection.

Universal Pictures launched Dracula as a Hollywood property with the 1931 Bela Lugosi film and have periodically returned to the franchise, with Frank Langella’s 1979 take on the role, the botch-job of Van Helsing and a proliferation of trademarked Universal Monsters merchandise); there have been rumbles of the creation of a Universal Monsters universe on the model of Disney-Marvel’s cinematic universe, but Dracula Untold would not seem to be a solid ground to start this project.

Shot in Ireland with sets, extras and costumes that evoke Game of Thrones, this is a comic book action-adventure with fantasy-horror elements, fatally overdependent on Luke Evans’ glowering presence and unsure whether to go for contemporary-sounding dialogue (Dracula repeatedly tells a dying comrade he’s ‘going to be okay’) and Black Shield of Falworth-style thigh-slapping swashbucklery.

With a lot of narration to fill in the extra backstory of a film that’s all about filling in backstory, we meet Prince Vlad (Evans) well into his career as Vlad the Impaler.  He’s hung up his dragon-emblazoned armour and has resolved give up impaling innocent people for the good of the country in order to devote himself to ruling justly, cuddling his blonde and supportive queen (Sarah Gadon) and being a good father to young prince Ingolas (Art Parkinson).

When wicked Sultan Mehmed (Dominic Cooper) demands Ingolas and a thousand other Transylvanian lads as press-ganged janissary warriors, Vlad feels he has no choice but to climb a mountain - in full armour, with a red cloak that gets in the way - and venture into a cave haunted by a craggy vampire (Charles Dance) who lets the prince drink his blood out of a skull bowl.

By this process, the hero gains super-powers for three days, with a get-out clause that he won’t turn into a full-on vampire if he refrains from drinking human blood in that time. It’s a dramatic problem, and goes against the premise of the film, that turning into a vampire doesn’t change Vlad in any real way - he is a one-man whirlwind of bats on a battlefield and his old scars heal, but remains well-intentioned, heroic and devoted to family.

Even his inevitable blood-drinking is done from a sense of duty rather than giving in to temptation or surrendering to corruption.  Though ungrateful subjects try to burn him and a gypsy loon (Zach McGowan) auditions for the position of Igor-Renfield-type monster’s assistant (cackling ‘yes, master’), vampire Vlad isn’t especially terrifying and even tragic circumstances don’t warp his morality.

A promising development is his raising an army of murdered servants as vampires for a final battle with Mehmed, but this fizzles out with the first light of dawn and a muddy finish.  A coda finds Dracula still walking the Earth, there’s no suggestion that he has turned evil or has lived through Bram Stoker’s plot, which means that this is the untold story of how Prince Vlad became an immortal nice guy you’d be hard pressed to identify with any previous version of Dracula.