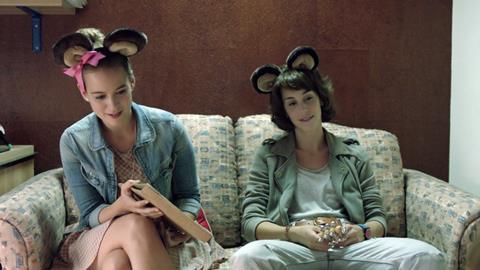 A delicately crafted charmer of a film, for a while Nejc Gazvoda’s colourful, funny and insightful film feels like a lesbian equivalent of Before Sunset as two young women wander the warm nighttime streets of Ljubljana, talking, having fun and gradually coming under each other’s spell.

Dual, which had its world premiere at the Karlovy Vary International Film Festival, is a tender and accessible film that deserves to find distribution and festival support.

The follow-up film to A Trip (2011), which premiered at the Sarajevo Film Festival, Slovenian director Nejc Gazvoda shows a show grip in blending playful romance with burgeoning depth of affection, and while the momentum slows in the film’s second half, the sheer charisma and charm of two leads Nina Rakovec (who also starred in A Trip) and Mia Jexen make Dual warm and watchable.

Due to a technical problem, a plane from Denmark heading to Greece lands at a Slovene airport, with the passengers eventually taken to a Ljubljana hotel for the night. Quiet young Dane Iben (Jexen) can’t face waiting in the hotel, and asks Tina (Rakovec), who drove the minibus from the airport, to drive her around the city.

The two slowly get closer. Later, when Tina is set to cycle home, Iben wanders with her, and the pair talk more deeply about what they want from life. Tina especially starts to fall for the fresh-faced Dane, but despite that fact that they seem very similar, one is hiding a terrible secret and the other is simply trying to find her place in the world.

While on the surface a love story, Dual is also a delicate drama about trying to make decisions and adjust to where you want to go in life, with Gazvoda delightfully balancing the playful innocence of a burgeoning romance set against the summer-in-the-city backdrop, the film is also about young Europeans trying to work out what their lives should be about and where they should be heading.

Beautifully shot by Darko Herič, the film also has a warm and perfectly complementary soundtrack Danish female duo Monkey Cup Dress, whose song Cold Heart is lip-synched by the cast at the start of the film to help set up the warm, whimsical and romantic nature of the film. The two leads are perfect, with Mia Jexen’s doe-eyed warmth and compassion a fine balance’s to Nina Rakovec’s nervy enthusiasm. Two young performers who will go far.