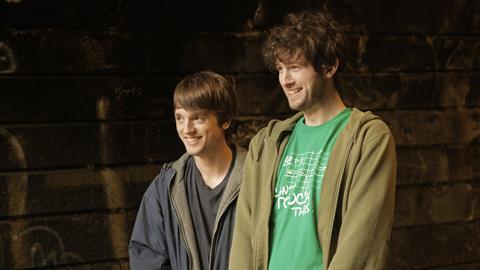 The quest for a rare comic book provides the basis for an often amusing hybrid of romantic comedy and hectic chase thriller in Electric Man, a promising first feature from co-writer/director David Barras.

In its brightest moments, Electric Man captures the intended vibe of The Maltese Falcon meets The IT Crowd.

Shot in 19 days on a budget of £55,000, Electric Man is a good deal more polished and confident than many recent micro-budget, independent Scottish efforts. It still has issues with tonality and coherency but the dry wit of the screenplay and engaging performances help to carry the day. Attractive Edinburgh locations add to the appeal and the film should merit a realistic Scottish theatrical release.

An impressive, animated title sequence neatly raises expectations of what is to follow as we meet Jason (Toby Manley) and Wolf (Mark McKirdy), the impoverished owners of Deadhead Comics. They need £5,000 to save the business.

At the same time the sinister Jimmy (Derek Dick) acquires a mint condition copy of the first Electric Man comic from 1937. American collector Edison Bolt (Mark McDonell) is willing to pay £100,000 for the coveted item but then the comic is stolen and falls into the possession of the bumbling innocents at Deadhead Comics.

The bantering relationship between buddies Jason and Wolf is the most successful aspect of Electric Man and is affectionately etched by Toby Manley and the Chris O’Dowd-like Mark McKirdy.

The buffoonish comedy chases are less persuasive and the film feels as if it might benefit from a further slight trim. In its brightest moments, Electric Man captures the intended vibe of The Maltese Falcon meets The IT Crowd with the film noir flavour underlined by the introduction of femme fatale Lauren McCall, played by Jennifer Ewing.