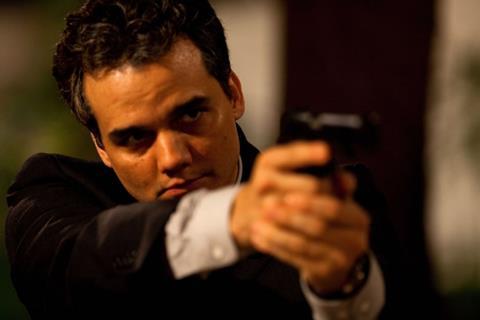 Jose Padilha’s first Elite Squad (Tropa de Elite) film in 2007 was one of the highest grossing films in Brazilian history and picked up the Golden Bear in Berlin.  The sequel, which goes on general release in Brazil on October 8 and received one of its first screenings as the surprise movie at the recent Rio Film Festival, may well blow the first out of the water, in Brazil at least.

Nascimento’s promotion brings him a new set of problems as he morphs from a gun-toting street-warrior battling Rio’s drug gangs into a heroic police bureaucrat who stumbles into the city’s brutal mafia underworld through a series of (at times unlikely) coincidences, including his ex-wife’s marriage to Fraga (Irandhir Santos), a leading human rights activist.

As the film progresses Nascimento heads into the bowels of Rio’s most dangerous favelas and deals with the city’s deadly mafia death squads, with explosive and tragic consequences, all of which are beautifully documented by Brazil’s young, but revered, cinematographer Lula Carvalho and complemented by an equally strong sound-track.

For those familiar with Rio politics the film is an exhilarating and at times tear-jerking ride through the city’s prisons, slums, hospitals and parliament that cuts dangerously close to the bone, with two major local figures make brief cameo appearances, a reminder of Padilha’s past in documentaries.

For foreign audiences Elite Squad 2 should hold a different appeal – a relentless, roller-coaster ride through South America’s mafia heartlands in which the lead character brings a touch of James Bond and Jack Bauer to the slums of Rio.