Emir Kusturica, film-maker and founder of the Kustendorf Festival

Emir Kusturica speaks to Geoffrey Macnab about Kustendorf Film Festival, which he founded three years ago, and honouring Johnny Depp, who is set to star in his forthcoming film, Pancho Villa. 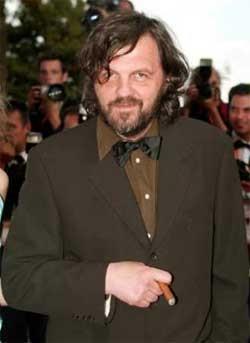 What drew you to build Kustendorf?

When I was making Life Is A Miracle, I was amazed aesthetically by this place. I though ‘let’s do something.’ Then, step by step, I realised I was making a city for myself. I was joking that I was going to put my image everywhere to be like a sweet dictator. When I started building, everybody told me I was fucking stupid. It’s four hours from Belgrade – no-one will come to see it. I don’t know why but people come here like crazy. We have 250,000 a year visiting this place. At the same time, we have some restaurants. We produce vegetables, we produce juice, we do all that is possible to feed the system with the basic elements. We’re like a medieval age economy. We’re becoming more and more self-sufficient. I am finishing my mini-farm with 50 cows that are going to be giving milk and all products.

You have said that you don’t want a commercial, business-oriented festival. How can the Festival evolve?

The festival is reaching the peak (of its possible size) but it is still following its basic principles. If you have Johnny Depp, you don’t choose him (as a guest) because he is one of the biggest star in the world but you know that his biography is filled with artistic achievements.

Why does Kustendorf place such emphasis on student filmmakers?

I was a jury member in Cannes a couple of times and I watched student movies. It’s amazing how good films are when they (filmmakers) are starting and how the commercial world destroys their capacity to make their films organically. In Kustendorf, we bring good directors. We have students who are coming here for free. We fly them over. We give them chances to learn. If you go to Cannes, you cannot have a student of cinema meeting Johnny Depp. Here, they can even drink together.

The festival must be expensive to stage. How do you pay for it if you don’t have sponsors?

You are going to executive-produce a feature film from one of the students.

This is my dream. It is the Japanese guy who won last year (Kohki Hasei). He met a German producer (Karl Baumgartner.) This is my utopia: that you could bring people together who could affect cinema in a better way. I don’t have illusions that I can change the world. I am too old to be so naïve. But I still believe that one good film could be born on the market that defends this idea that we are initiating here.

Will your Pancho Villa film have a Balkan flavour?

The Balkans and South America are the two places where Christianity was never taken very seriously. These are the paganistic places. We (in the Balkans) have a lot of things in common with them (the Mexicans) – the way we treat women, the way we approach women, the way we see justice.

The film is going to be in English?

No, Spanish believe it or not – so Johnny (Depp) and myself have to learn Spanish. I don’t know how to direct Spanish people speaking English.

Do you believe there is still a place for auteur cinema?

How films are going to be screened…this is the question. I think film will end up with each big city like London having two or three big halls where you will see cinema. Other films and video games will, be projected on phones, TV and the internet. But always you had cinema separated between Jean Renoir and Melies. Renoir was showing realistic poetry and the other one was going for fantasy. Today, you have these Avatar films that are spoiling both aspects. Great films, like Visconti, Tarkovsky, Kubrick, are going to have their own place. This place will be like how we see opera today. And the Avatars are going to be part of this world of gadgets.