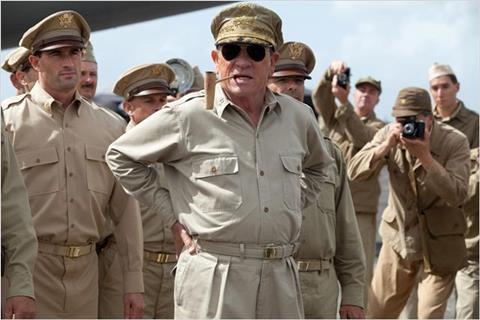 Adding a cross-cultural love story to an account of the post-World War II American occupation of Japan, Emperor works better as a historical thriller than it does as a romantic drama. And that may mean that this independently produced period piece starring Lost’s Matthew Fox will have to make do with a fairly niche audience, though Tommy Lee Jones’ enjoyable turn as General Douglas MacArthur should draw some mainstream moviegoers.

British director Peter Webber (Girl With A Pearl Earring) spins out the political intrigue quite effectively.

Premiered at Toronto last autumn, the film gets a March 8 US theatrical release through Roadside Attractions, which will be hoping that an Oscar win for Jones (nominated for his supporting actor role in Lincoln) can broaden what might otherwise be an audience made up largely of history buffs. International interest is likely to be strongest in Japan - where Shochiku is set to release in the summer - and other parts of Asia.

Fox plays the real life but little known figure of Bonner Fellers, a US general who was assigned by MacArthur to investigate the war role of Japanese Emperor Hirohito and recommend whether the Emperor should be punished or saved. While tackling his official mission, Fellers also tries - in a subplot invented by screenwriters David Klass and Vera Blasi  - to discover the fate of the young Japanese school teacher (Eriko Hatsune, from Norwegian Wood) with whom he had an affair before the war.

British director Peter Webber (Girl With A Pearl Earring) spins out the political intrigue quite effectively, though the film never quite shakes its slightly pedantic feel. The wispy love story is considerably less effective and the scenes in which Jones, perfectly cast as the egotistical and iconic MacArthur, provides a jolt of energy are relatively few.

And though its small scale design elements are convincing, the film, which recreated fire bombed Tokyo on locations in New Zealand, doesn’t provide much sense of place or offer up much in the way of historical spectacle.