Slumdog Millionaire writer spoke to NFTS students about the challenges of writing the epic thriller. 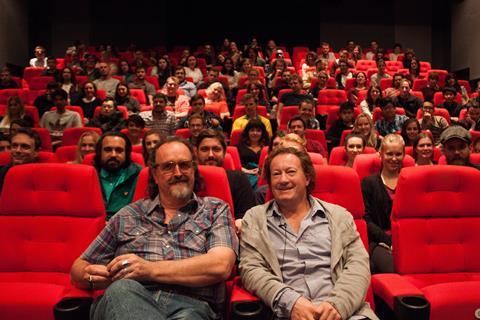 Oscar and BAFTA award-winning screenwriter Simon Beaufoy (127 Hours, Slumdog Millionaire, Salmon Fishing in The Yemen, The Full Monty) is a keen mountaineer who climbed up to Everest Base Camp in his 20’s, so he was well aware of the controversy surrounding the tragic death of eight climbers trying to reach the summit in 1996.

That controversy was partly fuelled by conflicting reports about the incident and the eight books written by many of the survivors and their families in the ensuing years.

So when he was asked, just weeks before casting, to work on the 2015 film Everest - the UK-US 3D biographical disaster drama directed by Baltasar Kormákur - Simon knew he’d be treading on tricky terrain.

Speaking to students at the National Film and Television School (NFTS), Simon said: “Pretty much everyone had their own version of events so it was tricky terrain trying to navigate my way through these versions to find the truth, while being respectful to those bereaved families. We felt a great responsibility to get the facts right for the sake of the relatives. A lot of people died.”

Asked whether he felt this compromised the drama, Simon replied: “The facts were so powerful that I didn’t need to add to the drama.” However, the research process did raise questions about ‘truth’ in filmmaking and the difference between “drama and documentary realism,” says Simon.

“Truth is a slippery word- it’s always subjective. The people on the mountain that day were dealing with extreme conditions, they only knew what they personally saw and because of the intensity of the storm and their exhaustion, some of them couldn’t remember the facts clearly.”

He decided to approach the problem in a ‘forensic way.’ By reading all of the biographies and reports about the events, even the radio comms transcripts of (every) conversation between the climbers and crew waiting at Base Camp, Simon was able to “unstitch and restitch” the facts and uncover previously unknown information about the day of the disaster.

Fortunately, his personal knowledge of mountaineering provided insights: “I know what mountaineers are like, how they think and what it’s like up a mountain. Some people who (thought they’d) made certain key decisions were in fact suffering from hypoxia oxygen starvation that confuses the mind.”

The mountain of information and viewpoints did present an editing challenge. Asked how he decided which version of events to put on screen, Simon admitted, “some things went in the cutting room,” and added, “It’s part of the challenge of trying to fit a story into two-hours.

“In movies, you may want a story to go in a certain direction but the material you have shapes the film; it tells you what it wants to be. The narrative takes precedence. It’s fascinating and sometimes frustrating - but you ignore it at your peril!”

Filmed in Nepal, the Italian Alps and Pinewood Studios in England, the film reportedly had a $65m budget and has a star-studded cast including Jason Clarke, Josh Brolin, John Hawkes, Robin Wright, Michael Kelly, Sam Worthington, Keira Knightley, Emily Watson, and Jake Gyllenhaal. The sheer number of characters on screen created its own challenges – not least because the majority of them are covered head to toe in mountaineering gear.

“Never write a film about a person wearing sunglasses or snow goggles; you need to see their eyes to know who they are!”

Comparing screenplays to music, Simon said that he was more used to writing  ‘chamber music for single characters’ rather than large scale orchestral symphonies.

“EVEREST was like a symphony in terms of the number of characters, the Hollywood film stars involved and the big budget. I was able to write in the script ‘…a big storms cloud approaches’ and there was the budget to create that using CG. I’m not used to that!”

The film’s mountain locations and the epic scale storm scenes are stunning and Simon Beaufoy is full of praise for both the producers and the original score by Oscar winning composer Dario Marianelli (Atonement, The Boxtrolls) who is a graduate of the National Film and Television School.

“This film is an epic feat of production and when you have the continuous sound of a ferocious storm, you need to find ways to break that tension so the sound design played a major part. It is wonderful.”

Everest is now on release