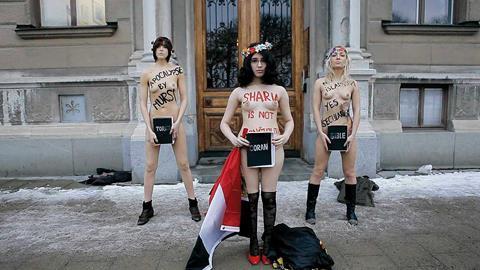 A striking documentary that shows that non-violent forms of protest and civil disobedience can change the world, Everyday Rebellion is made with languid grace and insight by directors and brothers Arash and Arman Riahi, and while perhaps too long and repetitive at times it gently underscores how violence isn’t the only answer.

The limited narration is spoken in whispers to help emphasise the ‘gentle ‘ nature of the system of protest.

The film, which premiered in competition at CPH:DOX in Copenhagen,  traverses world as it demonstrates the power, history, influence of non-violent protesting, showing how such disobedience creative as well as influential as boundaries are pushed and points well made.

From the Occupy movement in the US via the topless women protesters of the FEMEN group in then Ukraine on to Spain, Iran, Syria and Copenhagen the film details not just the protests themselves but where the ideas behind them are formulated in a philosophy leading to immediate action.

Interviewees include Lisa Fithian (a self-titled ‘non-violent consultant), Srja Popovic from the Centre for Applied Nonviolent Action and Strategies and Dr Massumeh Torfeh, an Iranian journalist and UN Ambassador, as well as a worried member of FEMEN who has to escape from Kiev when the secret police come knocking.

The limited narration is spoken in whispers to help emphasise the ‘gentle ‘ nature of the system of protest, and the arguments are certainly well made. There is nothing made of the more violent protest wings that can try and hijack nonviolent actions, but then Everyday Rebellion is celebrating and the fact that passionate peaceful activists can try – and sometimes succeed – in changing the world.