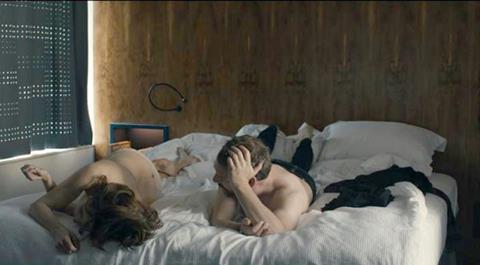 Joanna Hogg’s taut, clinical and dryly clever film tackles the twin subjects of property (as in a house) and marriage (as in a fractured, complex, relationship), and while perhaps just too austere and fragmented to click with mainstream audiences, it displays her art house credentials to great effect and shows why she is the new darling for a section of (essentially) UK-based film critics.

Exhibition is a chilly, thoughtful and gently striking film that likely deserves a second viewing to pick up on the gently provocative and subtly amusing moments that Joanna Hogg deftly layers into her film.

Exhibition, which had its world premiere at the Locarno Film Festival, takes a sharp and amusingly analytical look – in a similar way she did with her last film Archipelago – at the UK’s middle-class moneyed classes, bound together with a rather smug and superior sense of their own self-worth. But while these moments are darkly enjoyable, the real pleasure of the film is its controlled use of space and sound as it charts a relationship that just about seems to work, despite its obvious problems and issues, all set against the fascinating backdrop of a designer house.

In fact the film is almost entirely set inside this tall, stylish modernist building – the former home of the late architect James Melvin, to whom the film is dedicated – and even when it is not the lead characters – named simply as D and H - are obsessed with getting back to it as soon as possible. The irony of the film, therefore, is that they are planning to sell the house, which has a clear impact on he couple.

Though performance artist D (played by Viv Albertine) and architect/designer H (Liam Gillick) both work from the house, their communication is usually through a telephone intercom, though the noises of them moving around the house (the sound design is superb) also pervade into their precious spaces. He is annoyed that she won’t share details of her new work (plus is very keen on sex, which she finds often less than appealing) while she is worried his comments might hamper her before the work has started. He is rather self-centered while she is easily distracted and distant, and while he wants to sell the house, she is in love with the property – the opening shot even sees her curled up on a window ledge, almost communing with the house.

Though striking, the house – all sliding interior doors, a spiral staircase and minimalist chic – is not warm and welcoming (rather like the couple) with the sound design – echoey footsteps, alarms from outside and cars in the road – creating a vague sense of unease, which is exasperated by D’s comment about an incident involving H that ‘happened before’, though we are never told what it is.

But as they approach the sale (negotiated by an elegant estate agent, played with devilish charm by Tom Hiddleston, a regular in Hogg’s films) it is also clear that there is also something warm and surprisingly tender about D and H’s relationship as they share moments of humour and intimate warmth.

The lead performances are nervy and wary, which suits the characters and also reflects the fact that both are first time actors. Viv Albertine is best known as a member of 1970s punk band The Slits, while Liam Gillick is a Turner Prize nominated artist, and bring with them a refreshingly honest sense of unease and tentativeness as they circle each other and try and find the core of the couple’s relationship.

Exhibition is a chilly, thoughtful and gently striking film that likely deserves a second viewing to pick up on the gently provocative and subtly amusing moments that Joanna Hogg deftly layers into her film. A likely fixture on the festival circuit, strong reviews and positive feedback should help boost both profile and sales.