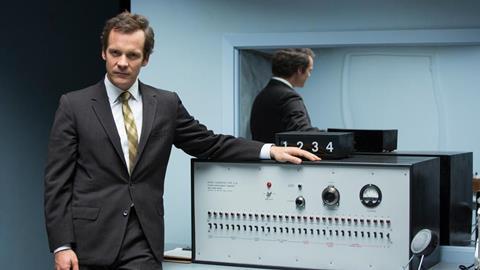 Stanley Milgram’s 1961 “social obedience” experiments famously (or infamously) showed how everyday people could easily be led to hypothetically torture another human being. The study, while controversial, remains a watershed moment in social psychology, and to this day, remains a fascinating and relevant exploration of conformity and authority.

Almereyda’s smartly written script attempts to make up for its lack of traditional dramatic elements with continuous questions about Milgram’s—and everyone’s—ability to make a choice in society.

With Experimenter, director Michael Almereyda (Nadja, Hamlet) is more interested in Milgram’s research—and how it still provides provocative food for thought—than the man or his life story. Indeed, though the film touches on key moments in Milgram’s life, this is no conventional biopic. Almereyda has created an experiment of his own: a kind of cinematic Rorschach test, prodding viewers to consider what they would do if sitting in the same seat as Milgram’s subjects.

The result is a film that will frustrate some and stimulate others. Commercial prospects are iffy, but the film could play decently in art-houses and ancillary markets due to a high curiosity factor and the presence of the always watchable Peter Sarsgaard in the lead role.

The film opens in the cramped Yale laboratory rooms where Milgram conducted his first experiments. An unsuspecting man in a suit (played by Anthony Edwards) is the first to follow the ominous commands of the experiment: Ask the “learner,” another man seated in a separate room, a series of questions; with each wrong answer, he is to deliver what he believes is a progressively more intense electric shock. (No actual shocks were given.) The experiment alone is tense and sufficiently loaded with psychological drama that Almereyda needn’t add much to the proceedings. The film returns to the experiments repeatedly, with different notable actors (Taryn Manning, John Leguizamo, Anton Yelchin) taking the hot seat.

The film offers a brief glimpse into Milgram’s relationship with his wife Sasha (Winona Ryder), but mostly, Experimenter traces the impact of Milgram’s studies; the controversies they engendered in the scientific community; and other fascinating research—such as his “small world” research that established the notion that there is “six degrees of separation” between everyone—or that people on the street will look up at something in increasing numbers if they see other people looking up. There is also a humorous diversion into the entertainment business, when Milgram agrees to a 1970s TV adaptation of his studies, starring William Shatner (Kellan Lutz) and Ossie Davis (Dennis Haysbert).

But Experimenter is less about story and more about ideas. Throughout the film, Sarsgaard’s Milgram breaks the fourth wall, speaking directly to the camera about his goals and his ideas as if delivering a lecture. And just in case the viewer might think they’re getting a standard movie story, Almereyda offers self-reflexive signposts to surprise them out of any willful suspension of disbelief. Most startling, early on, is a shot of Milgram walking through a school building, as a fully grown adult elephant shows up behind him—a literal visualization of the obedience study’s “elephant in the room,” that is, the atrocities committed by ordinary collaborators during the Holocaust.

Almereyda plays with other formal conventions, employing rear-screen projected backgrounds when he and his wife are driving in a car or visiting a house of a former mentor. These devices may shatter the illusion of the drama, but it may be the filmmaker’s objective to produce a movie where the spectator isn’t taking on a compliant viewing position.

For his part, Saargard delivers a deadpan characterization of Milgram: scientist as affectless clinician. It’s a fully committed performance, but one devoid of range (he barely cracks a smile throughout the entire film). But Saarsgard makes this extreme seriousness convincing, derived perhaps from the man’s Jewish origins and interest in the roots of genocide.

Ultimately, Almereyda’s smartly written script attempts to make up for its lack of traditional dramatic elements with continuous questions about Milgram’s—and everyone’s—ability to make a choice in society. These queries, about choice, will and morality, form the backbone of Experimenter, a film that, like the best of science, asks questions it can’t always answer.